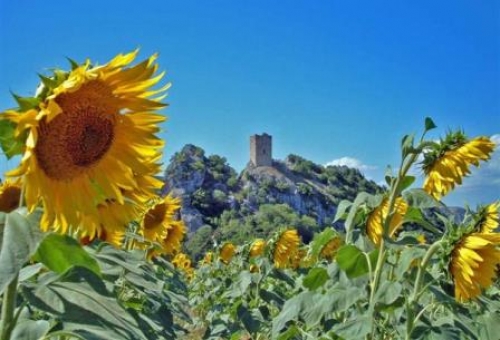 Amidst the cascade of mountainsides in the province of Molise, the charming town of Oratino has approximately 1,200 year-long inhabitants who revere San Gennaro as their patron saint on September 19 every year. Though the patron saint of many an Italian city, there is none more beautiful than Oratino, with the designation of la piu bella borgo.

The church where the Mass is celebrated has been restored with the guidance of the Ministero della Cultura, yet affords all in attendance a seat. Once the adoration of the Mass is completed, the core committee assembles to move the statue of their patron saint to the procession that will grace the stone streets of this quaint mountaintop village.

The procession is mixed with old and young alike, as they sing their praises meandering through the alleys and streets. Though every day is a feast day in Italy, the feast of San Gennaro in Oratino holds no commercial connotations, nor does it command a large crowd. Rather, it is a special devotion for all that live there, to the protector of their existence. As with any good feast day, the Mass and procession are followed by the orchestra and good food and wine!

My father was born in Oratino and felt personally blessed to be named after San Gennaro. As his destiny took him many miles from Oratino, he worked hard to keep this feast at the forefront for his fellow Oratinese immigrants. For over 45 years, James would travel door to door to visit the Oratinese community in Greater Cleveland, as well as in Niagara Falls, Toronto, and Ottawa. The parting gesture was a donation for the feast in Oratino.

After his passing in 2003, my mother continued the tradition of sending donations to the San Gennaro committee in Oratino, though she was not able to make the home rounds as my father did. She also had the statue restored to the fullest extent, including a Neopolitan velvet cape.

There is a story that there was an artist whose devotion to San Gennaro was so great, that the saint manifested himself to the artist in his dreams. Upon awakening, he created a painting depicting San Gennaro in the foreground and the devoted village of Oratino. If you visit the church in Cleveland's Little Italy on September 19, you will find a painting of San Gennaro by this artist from Oratino.

Tweet
More in this category: « Altopiano dei sette comuni - Between Tradition and Immigration Get a Gondola in Venice! »