The Carnival of Putignano 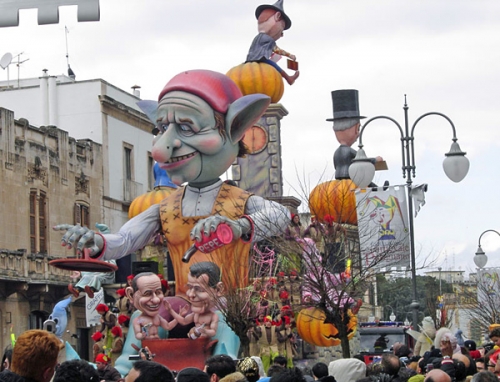 The Carnival of Putignano

When you think of Carnival, Viareggio, may come to mind with its colorful floats and famous parade, or perhaps Venice with its elegant forms and traditions. But in Italy there is another important Carnival that rivals the other celebrations in Viareggio and Venice - the Carnival of Putignano, a town in the province of Bari (Puglia).

The Carnival of Putignano is one of the oldest Carnival celebrations in Italy. Since 2006 the city has also held a summer edition, which if anything is more for the tourists. The mask feature of the event is called Farinella and owes its name to the dish of Putignano, a mix of roasted barley and chickpeas with the addition of salt.

It seems that the Carnival of Putignano, one of the oldest in Europe, traces its beginnings to 1394. In that year, the Knights of Malta, who governed the territory, decided to move the relics of St. Stephen the Martyr, inland from Monopoli, a small town near the sea, in the attempt to take them away from the attacks of the Saracens. Upon the arrival of the relics, peasants, left the fields and proceeded behind the festive procession and, after the religious ceremony, everyone indulged in dancing and songs. Some peasants said vernacular jokes, while others recited poems and improvised satires.

During the Fascist period, the "peasant" Carnival celebration turned into a more refined Carnival for the bourgeois citizen, so the parade of floats was born. The floats were built by the carpenters of the town, who put their expertise at disposal for the playful, fun Carnival. Even today, carpenters display their very best forms of art.

The Carnival of Putignano boasts to be one of longest celebrations. It begins on December 26 with a candle exchange ceremony, where people give a candle to the church to ask for forgiveness of their sins that they will commit during Carnival. The festival then continues with recitations of rhyming poems in the local dialect, on topics like politics and other popular subjects. In honor of the event's original Carnival tradition, the poem performance is sung by groups of citizens in peasant clothes and carrying hand tools work. But it's not until January 17, the feast of St. Anthony the Abate, that Carnival really takes off in full effect. From this date, and until the last parade of floats, each day is Carnival.

Tradition has it that the Carnival events are dedicated to different categories of individuals. For example, every Thursday, aims to make a specific social class the protagonist, mixed with satire and fun. Social classes that are festival favorites are priests, nuns, widows, unmarried youth, married women and married men.

The carnival ends on Shrove Tuesday, with an evening parade and the celebration of the funeral of the Carnival, represented as a pig.

Tweet
More in this category: « The Motorvalley Region Discovering the Dolomites »