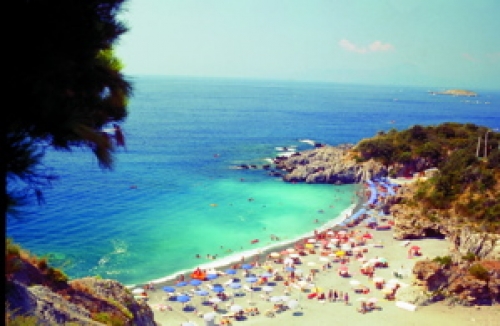 Situated high on a hilltop overlooking the sparkling Golfo di Policastro, Maratea remains a well-kept secret among Italian visitors and Europeans. With its beautiful turquoise seas and plunging cliffs, it is often referred to as a mini-Amalfi.

Located just two and a half hours south of Naples, Maratea's 20-mile stretch of rocky coastline gives southern Italy's Basilicata region its only outlet on the sea. Sophisticated Italians escape here to enjoy this charming town, its elegant hotels and its clean, uncrowded beaches.

This community of 11 small villages seems to combine the best of Italy's better-known playgrounds. The winding roads offering breathtaking views makes one feel as if they were driving along the Amalfi Coast while the Mediterranean flora and fauna evoke comparisons with Portofino.

Maratea offers a bonanza for nature lovers. Situated in a valley between Italy's two largest national parks, Pollino and Cilento, Maratea provides many nearby opportunities for hiking. For water lovers, boating and scuba diving await. Even the most casual gardener will be impressed with the area's plentiful bougainvillea and geraniums, as well as pine, olive, lemon and oak trees that dot the coastline.

The heart of Maratea is the area's old town, known as Maratea Superiore, built into a mountainside (over 2,000 feet above sea level) in order to afford protection from the medieval invaders. This pristine village boasts a staggering 44 churches with just slightly over 6,000 inhabitants. The main church is the fifteenth-century Chiesa di Santa Maria Maggiore, which has a lovely Baroque interior.

The Redentore is a very clear dominating presence in Maratea, an enormous marble Christ dominating the peak of Monte San Biagio. It was built in 1965 by Bruno Innocenti. You can drive up the winding five kilometers road from Maratea for a closer look at the statue, which curiously has its back turned to one of the finest views of the Golfo di Policastro on the entire coastline. Instead it faces the Santuario di San Biagio, originally built in the sixth to seventh century on the site of a pagan temple dedicated to Minerva.

Atop one of the steeper lanes sits La Locanda delle Donne Monache, a former convent turned into a four-star hotel. The building was completed in 1735 to house Visitandine nuns. As you drive along the coast road look for the six Spanish towers built in the sixteenth century as defense against pirates and invaders.

The coastline is also dotted with numerous grottoes or sea caves, some of which you can reach by boat. The one that you can reach by car is La Grotta delle Meraviglia. Spotlights highlight the spectacular stalactite and stalagmite formations in this large chamber located 100 meters underground.

To complete your day head to the Porto, where you can see the sleek yachts and bright blue fishing boats bobbing in the water.

Don't expect to find long white sandy beaches in Maratea. The sand here is coarse and often grayish in color. Fiumicello is a popular spot and has a decent stretch of sand, as has Acquafredda, while Castrocucco boasts the longest beach on the coast. All three of these beaches can be reached by car. The beaches are dotted with bars and restaurants, where you can hire watersport equipment as well as umbrellas and chairs.

To fully appreciate the rugged headlands, cliffs and mountains of Maratea, hike one of the ten hiking trails that range from one to five hours in length and take you through the typical, scrubby bushland of the Mediterranean. If you are a cyclist you will find eight cycling itineraries for Basilicata.

The festival of San Biagio, Maratea's patron saint, takes place yearly on the second Saturday in May. The silver bust of San Biagio from the Santuario di San Biagio is covered with a red cloth and ceremoniously carried down the long winding road to Maratea's main piazza. The weeklong celebration begins once the bust is uncovered.

My Favorite Hotels
The Hotel Villa delle Meraviglie: This lovely hotel is situated in a private bushland above the blue waters of the Golfo di Policastro, It is a small intimate hotel with just 16 rooms.

The Hotel Gabbiano: This hotel sits on the beachfront and offers guests dramatic views. Its seafood restaurant is open for both lunch and dinner and overlooks the bay serving freshly caught fish.

My Favorite Restaurants
Ristorante Lanterna Rossa: Located on Via Porto Arenile, Porto di Maratea. The food here and service is outstanding, and the restaurant offers scenic views of the port. Be sure to try the Linguine alla Lanterna (fresh pasta with whole clams and red chicory).

Da Peppe: Located on Via Luppa 1, Acquafredda di Maratea. This is a great restaurant and pizzeria with lovely sea views from the garden terrace.

How to Get There
You can reach Marates from Rome by four and half-hour train ride.

Author's Note: Maratea will be included as part of the Best of the South and Sicily group tour in September 2010 along with Sicily, the Aeolian Islands, Puglia, Sorrento, Ischia and Rome. I will personally escort the tour.

Peter D'Attoma is the president of DaVinci Custom Travel & Tours. He has over 25 years of planning and designing independent, custom and escorted tours of Italy for individuals, groups and incentives. For more information call 330-633-2292 or visit www.davincicustomtravel.com.

View the embedded image gallery online at:
https://www.lagazzettaitaliana.com/region-of-italy/7574-maratea-basilicata-s-seaside-secret#sigProId88682a69ea
More in this category: « The beautiful towns of Il Chianti Discovering Puglia »