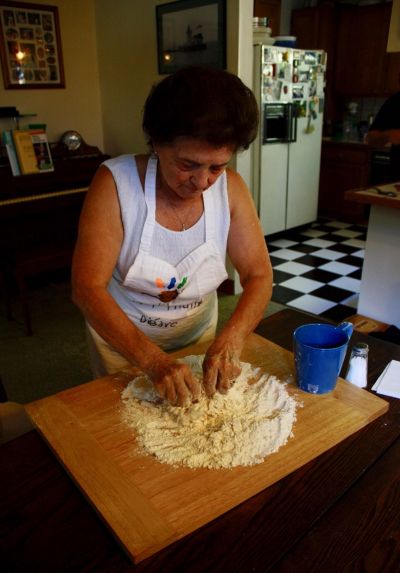 Clelia at work mixing flour and water for bread or pizza.

In many Italian homes, bread, along with a little dose of Catholic superstition, is an important daily staple. Not having them with every meal is inconceivable, especially for my mother. She appealed to God or Jesus for divine intervention when baking bread or pizza or anything else that needed to rise, since, of course, Jesus was an expert on rising.

Clelia continued the old tradition of saying a prayer while making the sign of the cross and/or using the outside of the hand to indent a cross in the top or sides of yeast dough before putting it aside to rise, even though the symbol would disappear once it rose, since it was the act and sentiment that counted.

In Italy before WWI, and especially in very small towns, few households had an oven of their own so the risen dough would be carried to the communal oven for the town baker to bake and then picked up when ready. To be sure that each person received their own loaves back, another cross or distinguishing mark, which became a part of the design of the bread, would be made on each loaf prior to baking.

Baking prayers differed from province to province. My grandmother and later, my mother, performed a Molisana ritual. After forming the sign of the cross on the unrisen dough and crossing themselves, they would say “San Martino, cresce, cresce, cresce, pan e vino.” The bread and wine symbolized the body and blood of Jesus, as well as being staples in our family home. Nonna Nuccia and Nonna Maria supplied us with bread and our dad and grandfather made their own wine so we were well-connected.

If the bread turned out as expected, as a child I remember hearing this exclamation of joy, “Dio Benedica!” meaning, “God bless it!”

This is a recipe from my yet-to-be-published book featuring my mother and some of her cherished recipes.

In a saucepan mix the yeast, salt, oil, and egg in the warm water. Pour the yeast mixture into the flour and combine. Place the dough onto a floured board. Fai un bel impasto che lavori per 20 minuti. Work (or knead) the dough for 20 minutes. Oil a large, deep saucepan and place the dough in it to rise. Italian or not, you can make the sign of the cross on the dough for God’s help in the rising process, like my nonne and mamma used to do. Cover with blankets and put inside the oven. Let it rise for about 3 hours.

If you are making pizza, this recipe makes 3 large rectangular pizzas. Oil the pizza pans, divide and spread dough and let rise again for another 3 hours. Add your pizza toppings and bake at 425 for 15 minutes, then at 375 for 30 more minutes. Clelia always checked the bottom of the pizza to tell whether it was done—it must have been golden before it could be taken out of the oven. Pazienza!

If you are making loaves of bread, this recipe makes 3 loaves. Oil 3 loaf pans, divide and put dough in each pan and allow to rise for another 3 hours. Bake at 375 until golden, 35-45 minutes.