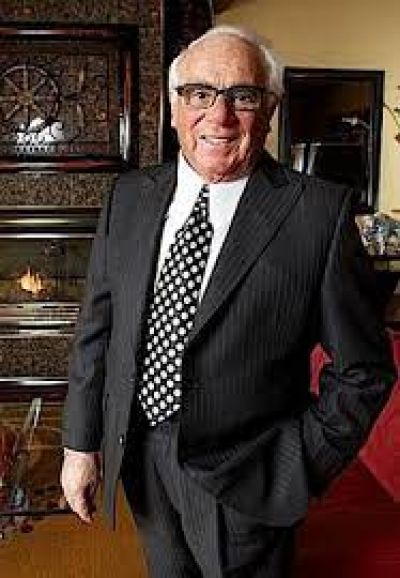 Restaurateur Russell J. Salvatore has become synonymous with everything for a greater and progressive Buffalo. He is one of Buffalo’s greatest community benefactors, generously gifting millions to Buffalo and western NY projects.

Born in 1933 to Italian immigrants and the youngest of three children, Salvatore lived to build a great restaurant and tradition, Mr. Steak, in Buffalo and WNY, becoming a multi-millionaire in the process and most importantly to him, a beloved philanthropist. What a remarkable life: Salvatore continues to live the American Dream at the young age of 89.

While still in grammar school, Salvatore worked at his father’s tavern on Delevan Ave. on the East side of Buffalo. It was a modest business where Chevy plant employees would cash their checks and stay for a shot and a beer. Young Salvatore would often skip classes at his high school to work side-by-side with his father at the tavern. He loved working more than doing classwork, he readily admits.

“I bought the whole property, eight acres, for $40,000,” Salvatore recalls. “Then we started growing. We put on an addition every year.”

Slowly and artistically, Salvatore’s Italian Gardens was constructed to showcase a decorative, Italian-style architectural elegance, and some people thought it had a Vatican theme. Customers could gaze on a three-dimensional panorama of Rome by moonlight and his St. Peter’s Dome was impressive and memorable to onlookers.

“I used to go to different auction and antique shops and buy things,” Salvatore said. “I was down in Florida, and I went to this place that sold cement statues. I bought thousands of them there, and they ended up lining the driveway,” Salvatore said.

Salvatore then tried retirement but being away from what he loved was too tough. “I look forward to going to work. What are you going to do, sit home and watch television? You get bored. You get depressed,” Salvatore said. “I go to work because I shake hands with people, meet new people, and it’s a good feeling to make people feel good, and in the restaurant business, if you serve a decent meal and give good service, you get the pats on the back and that makes you want to come back to work every day.”

In 2008, Salvatore opened Russell’s Steaks, Chops, and More along with Salvatore’s Grand Hotel. Today Russell’s is known as one of the premier steaks houses in the entire country.

Salvatore’s philanthropic contributions are into the millions. In 2008, he donated the land and building for the Trocaire College Extension Center, now known as the Russell J. Salvatore School of Hospitality and Business. He created the Russell J. Salvatore Foundations, totaling more than $4 million in grants to date, and in 2017, he donated $1 million to Erie County Medical Center’s Campaign.

Salvatore has also created Patriots and Heroes Park on Transit Rd., right of Russell’s Steaks. He purchased the land with thoughts of building a shopping plaza but donated it and $3 million, instead, to all the servicemen and the victims of Flight 3407 and 9/11, beautifully stating: “It’s dedicated to all those people from the bottom of my heart. This is not my park. This is your park.”

Since building Patriots and Heroes Park, Salvatore has added a statue of St. Michael Archangel, the patron saint of law enforcement and a WWII monument dedicated to the men who fought in the Battle of the Bulge.

Salvatore has also had a long relationship with the fans of the Buffalo Bills. More than once Salvatore has bought out the remaining tickets for a Bills home game so that it could be shown on local television. Salvatore has sponsored countless events that have benefitted sports at all levels.

“The participants and fans of WNY sports cross every possible demographic from little league, high school, college, and the pros. Whether you are 8 or 81, a man or a woman, there is something for everyone. Next to our great independent restaurants, sports mean Buffalo to me!” said Russell.

While Salvatore has enjoyed remarkable success as a restaurateur, he also learned at an early age that “giving back” is important. “I can remember as a young boy my dad having delivered Christmas gifts to neighbors and friends. He was so appreciative of his customers,” said Salvatore, “He would always have holiday parties for all the customers; he would arrange trips and alike to back what he could. I guess this instilled in me to never take customers for granted and by giving back to your community, you can help make it stronger.”

Salvatore was openly asked about his charitable contributions and what motivates him to do so. He said, “I don’t want to die with a bushel full of money, so I’m giving it to those who need it. I was born in Buffalo and the people of Buffalo have been good to me. So why not give it back to the people who made me the success that I am?” “When I pass away, I’ll take as little as I can. I hope there’s a cocktail lounge in heaven, but I’ll need someone to buy me drinks; I will have left all my money here, and I’ll be broke.”

Buffalonians are very fortunate to have been graced by Salvatore’s incredible generosity and philanthropy, now, and into perpetuity. Salvatore is indelibly inscribed into the annals as a living Buffalo legend. Salvatore is that fluid gift that just keeps on giving. Bravo, very well done, and thank you, Russell J. Salvatore. A resilient, first-generation Italian American, a successful Buffalo restaurateur, and a trailblazer for monumental progress.