On the Cover: The World's Oldest Nativity Scene 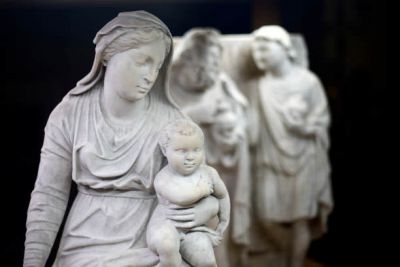 The underground Chapel of the Nativity in the Basilica of St. Mary Major in Rome, known to Italians as Santa Maria Maggiore, once contained at least six marble nativity statues sculpted by Arnolfo di Cambio in the late 13th century.

Arnolfo di Cambio, an Italian architect and sculptor, was born in Colle Val d'Elsa, Tuscany. He was Nicola Pisano’s chief assistant on the marble Siena Cathedral Pulpit for the Duomo in Siena Cathedral (1265–1268). During the late 1200s, he worked on the presepio of Santa Maria Maggiore, on Santa Maria in Aracoeli, on the monument of Pope Boniface VIII (1300), and on the bronze statue of St. Peter in St. Peter's Basilica.

The nativity figurines were commissioned in 1292 by Pope Nicholas IV, the first Franciscan pope, who was inspired by St. Francis of Assisi, creator of the first living nativity in Greccio, Italy, in 1223.

Sante Guido, an art historian and professor at the Pontifical Gregorian University, told EWTN Global Catholic Network (the largest religious media network in the world) that five of the marble statues in the nativity scene today are completely original to the 13th century.

This means that this nativity scene was present when St. Cajetan experienced an apparition of the Child Jesus in the Chapel of the Nativity on Christmas night in 1517 and when St. Ignatius of Loyola chose to offer his first Mass in this chapel in 1538.

It is unclear how many figures in total made up the nativity scene commissioned by Nicholas IV, but the marble figures that exist today of St. Joseph, the three Magi, and a single work depicting both a cow and a donkey are part of the original set, according to Guido. The statue of the Virgin Mary enthroned with the baby Jesus underwent significant restoration in the late 16th century, he explained.

The Italian art historian and restorer noted that this is not the first depiction of Christ's birth in Christian history, but the first nativity scene in the form as it is known today. "In the history of Christianity there are many depictions of the nativity of Christ, of course, even on the early Christian sarcophagi, but also in the Romanesque cathedrals and in the Gothic cathedrals there are depictions of an episode in the life of Christ: his birth," he said. "Here instead we have the representation of the nativity, according to the spirit of St. Francis, so this nativity is the first nativity scene in history. It is not only a representation of the nativity, but it is a nativity scene."

The Basilica of St. Mary Major's connection to Christ's birth goes back for centuries before this nativity scene was commissioned. The basilica has a precious relic of pieces of Christ's crib sent from Bethlehem by St. Sophronius, then the patriarch of Jerusalem, to Pope Theodore I in the seventh century. For this reason, the basilica was once called St. Mary of the Manger and was also referred to as "the Bethlehem of the West."

This relic of the manger was historically kept in the crypt Chapel of the Nativity, which was first created in the seventh century but has been repeatedly reconstructed over the centuries.

Many changes and reconstructions took place in the basilica. When Pope Sixtus V (1585-1590) wished to erect the large Chapel of the Blessed Sacrament or Sistina in the right nave, he ordered the architect Domenico Fontana to transfer, without dismantling, the ancient "cave of the Nativity" with its surviving elements of Arnolfo di Cambio's sculpture.

The three Magi, dressed in elegant vestments and shoes in a rough gothic style, and Saint Joseph admire with a sense of wonder and reverence the miracle of the Baby in the Virgin Mary's arms warmed by the ox and the donkey.

Tweet
More in this category: « A Look Back: The Biggest Christmas Tree in the World Legendary Coach Jim Valvano Never Quit »