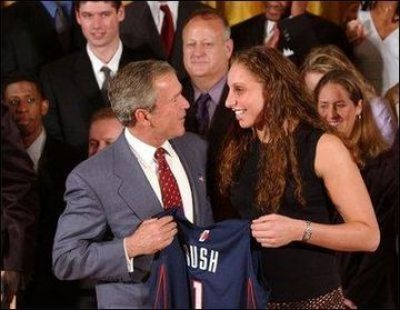 Powerful, all-encompassing words like winner, legendary, and immortal meritoriously describe Taurasi’s unprecedented contributions in women’s basketball. In the past 22 years, Taurasi has repeatedly proven to be the best in professional, college, and Olympic competition in the history of women’s basketball.

Taurasi is deeply appreciative and quick to credit her Italian father, Mario, and her Argentinian mother, Liliana, for their love and instilling in her that fiery competitiveness she displays on the hardwood. Mario was a professional soccer player in Italy for several years, excelling as a goalkeeper. He met and married Liliana in Argentina and they emigrated to southern CA in 1978 before they had Diana in 1982 and her older sister, Jessika, two years earlier, settling in the small yet diverse agricultural town of Chino.

Taurasi vividly recalls: “I watched dad go to work every day from 6 a.m. to 6 p.m. as a sheet metal worker in a factory, no matter what, not because it was fun. I remember, one time, dad had accidentally cut off the tip of one of his fingers, and he just went to work the next day.” Watching her dad do the same routine, working 60 hours a week, rubbed off positively on young Taurasi, slowly building the foundation of her grit, toughness, and work ethic that has been on display for the past 22 years. Taurasi’s eventual rise to success was not an accident. She earned it.

Growing up in the Taurasi household meant you interchangeably spoke three languages – English, Italian, and Spanish. They ate Argentinian and Italian cuisine, no American-food exceptions were made. Food was Liliana’s love language. It spoke for Liliana and Mario and the Taurasi household was full of affection, clearly obvious to anyone who was invited to dinner there.

Jessika remembers the lessons she and Diana learned from their parents, “My parents clearly showed us and told us ‘Look, we moved here (to America) to have a better life for our kids. We didn’t want you to have holes in your shoes and one pair of clothes. We moved here, we sacrificed to give you a better life.’”

Diana agrees and is forever appreciative saying, “I wake up every morning and I feel like I owe them more. They picked up and came to another country, didn’t know the language, maybe knew two or three people, because they knew there was just something better for our family here than in Argentina at the time. And they didn’t do that lightly. So, for me, my feeling is, whatever I’ve been able to give them, I owe 100 times more.” It is a feeling of deep appreciation that persists inside Taurasi to this day, as she conquers every mountain in women’s basketball.

While growing up in Chino, Taurasi’s athletic gifts soon emerged as a standout soccer and basketball player by the time she was in the eighth grade. At 6 feet and 163 pounds with speed and agility, she was the ideal point guard, displaying uncommon dribbling, passing, and three-point shooting skills and wizardry like few before her. However, soccer was the number one sport in the Taurasi household. Selflessly and objectively as pensive Italian fathers usually can be, Mario assured his young and talented daughter, Diana: “You should choose basketball because you will have more opportunities. You are special in basketball.” Dad was instinctively right, Diana never looked back, and she passionately began perfecting her basketball skills and carving out her future legacy in women’s basketball lore.

Dozens and dozens of college scholarship offers came pouring into the Taurasi household, after Diana graduated and gained statewide and national recognition at Don Antonio Lugo High School in Chino. She was named the 2000 Naismith and Parade Magazine National High School Player of the Year. Her high school basketball prowess and success immediately prompted the venerable UConn Huskies Women’s Basketball Coach Geno Auriemma, an Italian immigrant himself, to travel to Chino. Auriemma had firsthand familiarity with the cultural circumstances. He challenged and urged the highly recruited Taurasi, “If you want to be something different and if you want to become someone special, come to Connecticut with me,” instantly bringing Taurasi’s parents to tears of joy.

Soon thereafter, Mario and Liliana gave Diana their blessings, advising her to go to Connecticut with Coach Auriemma. No one could have scripted it better at that important time in Diana’s life. Diana chose UConn, her first major step to a storied and unimaginable basketball legacy for the ages.

Taurasi began her collegiate career at UConn in the 2000-2001 season. Primarily playing point guard for Auriemma, Taurasi led the Huskies to three consecutive NCAA Division I championships (2002-2004). She received many personal accolades at UConn, including the 2003 and 2004 Naismith College Player of the Year award, the 2004 Wade Trophy, the 2003 and 2004 Honda Sports Award, and the Associated Press Player of the Year award. Coach Auriemma called Taurasi, “The best basketball player I have ever coached on the collegiate and Olympic levels of competition.”

In addition to her remarkable achievement of five gold medals in Olympic competition, Taurasi has garnered three gold medals at the world championships in 2010, 2014, and 2018.

In 2017, Taurasi married former Phoenix teammate Penny Taylor, who is currently the Phoenix Mercury Director of Player Development. In 2018, Taylor gave birth to the couple’s son, Leo Michael Taurasi-Taylor, who is now three-years-old.


View the embedded image gallery online at:
https://www.lagazzettaitaliana.com/people/9815-diana-taurasi-s-stardom-showcased-at-2020-tokyo-olympics#sigProId4f50fa763a
Tweet
More in this category: « The President and First Gentleman On the Cover: Barrea Lake »