On the Cover: Ferragosto 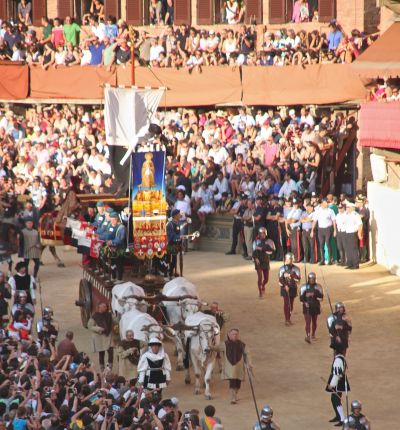 In Syracuse, Sicily, Italy, a Madonna statue is carried on a back alley of Ortygia Island on Ferragosto (Assumption Day) to celebrate this mid-summer holiday.

The 15th of August is the day when Roman Catholics celebrate the Assumption of the Virgin Mary into Heaven; the day when Catholics believe Mary ascended to heaven “body and soul” after the end of her life on earth. However, it was a holiday in Italy long before it took on a religious significance.

Ferragosto comes from the Latin Feriae Augusti (the festivals of the Emperor Augustus) which were introduced back in 18 BC, probably to celebrate a battle victory, and were celebrated alongside other ancient Roman summer festivals. These festivities were linked to the longer Augustali period, intended to be a period of rest after months of hard labor in the fields.

In Roman times, the celebrations included horse races, and the Siena Palio dell'Assunta, which usually takes place on August 16, keeps these traditions alive. Today, the holiday combines both its ancient Roman and Catholic roots; it also marks the semi-official start of Italy's summer holiday season.

Traditionally, Italians use the August long weekend to take a trip, usually to the seaside, lakes or mountains. During the era of Fascism, the regime would organize trips with special offers for the 13th -15th of August, the idea being that less well-off workers would get the opportunity to visit a different part of the country. Even today there are often discounts on packages for the Ferragosto weekend, though it is likely that train tickets and hotel rooms sell out fast.

Ferragosto is celebrated in various ways throughout the regions of Italy and Sicily. From festivals in piazzas to regattas and horse races to religious pilgrimages, the holiday is adored by all Italians.

Tweet
More in this category: « Italian Influences on an Italian American Poet Educated in Ohio A Look Back: Mino da Fiesole and the Church of Santa Maria Maggiore in Rome »