On the Cover: Polignano a Mare 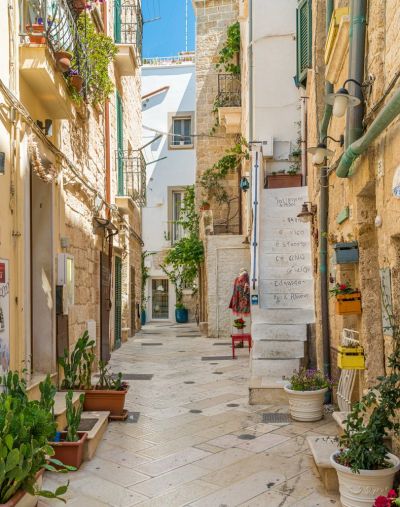 Polignano a Mare is a town in the Province of Bari, Puglia, on Italy’s southern Adriatic coast. Arguably one of the most romantic spots in the region, it is a craggy slice of land with several caves that has seen its fair share of invaders throughout history along its limestone cliffs. The historical, white-washed Medieval town is just as pleasant as the adjoining coastline.

The origins of this enchanting place date back to the 4th century B.C. when Greek settlers founded the city of Neapolis. It flourished under the Romans and was important enough for Emperor Trajan to direct his Via Traiana, built between 108-110 A.D., through the town. Remains of this road include a bridge at Lama Monachile, just north of the historic center.

Polignano a Mare is home to some of Puglia’s loveliest beaches like the white-pebble Lama Monachile, also known as Cala Porto. Ringed by dramatic cliffs, Cala Porto is one of the most coveted and most photographed locations in the region.

Not too long ago, Polignano a Mare was basically unknown to all but Italians. That all changed with a simple photograph. The picture was of a small, pebble beach edged by limestone cliffs, white-washed houses and the vibrant waters of the Adriatic Sea. The photo was the beautiful Cala Porto and it changed the course of the region’s tourism. Today, people from all over the world yearn to bathe on the gorgeous beaches of Polignano a Mare.

Centrally located in Puglia, Polignano is not far from the region’s two main airports in Bari and Brindisi that service flights from Rome. Trains run frequently from Bari to Polignano and are a convenient option as well. Keep in mind, though, if you are planning a Puglia itinerary, your best option will be to rent a car. With a car, you can easily reach other popular towns like Alberobello, Monopoli, Ostuni, and even Lecce further to the south.

Polignano is famous throughout the world for cliff diving. Visitors can also take in the spectacular views over the cliffs onto the sea, enjoy a meal, and stroll through the Centro Storico with the obligatory gelato. Also known as “The Pearl of the Adriatic,” the gorgeous seaside town of Polignano a Mare is an unforgettable stop on your next tour of Italy.

View the embedded image gallery online at:
https://www.lagazzettaitaliana.com/people/9742-on-the-cover-polignano-a-mare#sigProIda41fb200df
Tweet
More in this category: « A Look Back: My Love Affair with Sicily A Look Back: Traveling along Abruzzo's Wine Route »