"Not for Self: A Sicilian Life and Death in Marion" 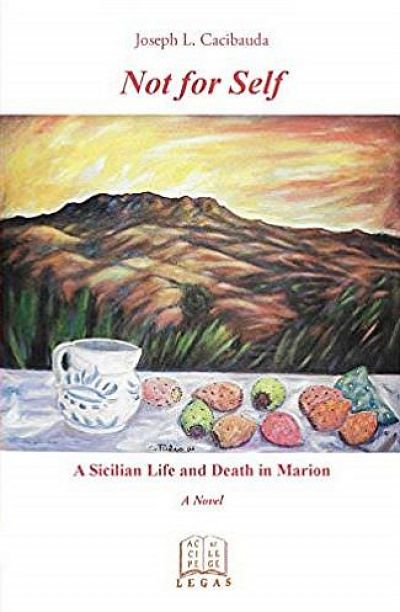 From the Italian American Press:

The early 1900s brought a mass migration of Italians to America. In the Sicilian mountainside village of Burgio, founded by Arabs during the Middle Ages, a family struggles to survive: “Peasant farmers labored and coaxed the fields to produce, while breezes, when there, whispered past sunburnt ears in demons’ breaths ‘Give up.’”

Joseph L. Cacibauda wrote “Not for Self: A Sicilian Life and Death in Marion” based on the true story of his distant relative Gaetano, following his trail from Burgio to Marion, IL and weaving in the life-changing circumstances in Italy and the dramatic events in America during the turn of the century. In Italy, the aftereffects of unification were rippling through the southern regions and three brothers “left for America, covered in the shroud of parental blessings…to work in the coal mines.” In later years, their twin brothers, Gioacchino and Gaetano, would follow.

Before he sails to America, Gaetano marries. In 1909, he leaves his wife and two daughters to join his brothers. Aboard the ship passing the Statue of Liberty, Cacibauda captures the essence of the immigrant experience: “The ‘huddled masses’ of first and second classes would receive a warmer welcome than would the ‘tired and poor’ souls in steerage.”

As Gaetano goes through the inspection process at Ellis Island and trails along on the train ride to Marion, so does the reader. Four years later, “Gaetano, his name now Americanized to Jake,” reunites with his wife and daughters. With Gino, formerly Gioacchino, the brothers make wine, “their maiden attempt in the new country and their continuance and affirmation of a cherished family tradition.”

In a few years, Jake is able to buy property and, with a partner, open a tavern. However, Prohibition forces Jake to make a crucial decision. With the price of alcohol increasing, he can make more money because “special customers know about the wine, the beer and whiskey in the back.” He rationalizes, “You pay off the right people and they’ll turn their heads towards those who don’t pay them…This new law won’t last.” Except, it lasted longer than Jake expected.

Meanwhile, Jake’s daughters openly avoid going to school. Their new teacher “said that she better not catch anyone speaking Italian or she will switch them.” Their previous teacher also frightened them, but in a chance meeting with him at a local store, he provides Jake with an explanation: “Yes, I yelled at most of the kids…They need to speak English if they are going to become Americans and compete with the Americans.” He explains why he was fired: “A man came to the school principal…and wanted to know why a foreigner was teaching American kids…Since I am Italian and a Catholic I might begin teaching all the children to pray to the Pope instead of God…Since I am a foreigner I do not understand how to be a loyal American.”

WWI, the Selective Service Act of 1917, coal mining, the inner workings of the Ku Klux Klan, bootlegging, local and national politics, and the significance of religion are intertwined with Jake’s life. Additionally, Cacibauda introduces numerous individuals and their influences on Jake’s experiences. The author notes, “This narrative…is an historical fiction based on Sicilian records, Midwestern newspaper accounts, and the books written about the area fused with my conjectures of possible outcomes from certain facts and events…I’ve changed the names of many characters in deference to their descendents” but “I have kept true a number of others’ names because of the historical need to mention them.”

“Not for Self” is the second book written by Cacibauda and published by Legas in the Sicilian Studies Series. His first book, “After Laughing Comes Crying: Sicilian Immigrants on Louisiana Plantations” is also a historical novel. Both books have been meticulously researched and include extensive bibliographies and both provide a look into the life of an Italian immigrant during a turbulent time of transformation in Italy and in America.