About the Author: Emilio Salgari 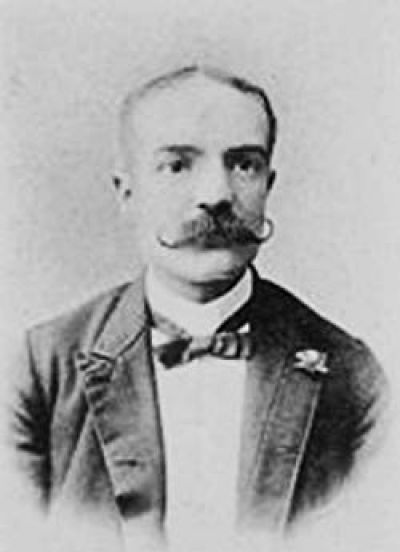 When I was a boy, I loved the great adventure authors typically read, in my day, by adolescent males. You know the list; Edgar Rice Burroughs, Jules Vern, Tolkien, and the like. They transported me from my little pedestrian corner of the world to new exciting lands of adventure and glory. Although not as well known to the English-speaking world, Italian youth had their own weaver of adventurous tales, Emilio Salgari.

Salgari was an industrious author who wrote over 85 novels with titles such as “The Black Corsair,” “The Pirates of Malaysia,” “Adventures in the Far West,” and “The Queen of the Caribbean.” These are fun novels filled with the exploits of heroes in exotic locales. Some critics claim that Sandokan, a recurring Salgari character, is the alter ego of Garibaldi. Like Garibaldi, Sandokan is a man of action who fought for the oppressed. At the same time, the women in Salgari’s books were both modest and sensual, taking on roles that were not common for women of the time, such as sea captains.

For the most part, this genre is not necessarily taken seriously by arbiters of what qualifies as literature. Salgari was never accepted, as a result, among the literary elite of his time which ultimately is their failure for not recognizing the man’s eloquence. He wrote lines such as: “the sensuous ships waiting to be caressed by the gulf” and “my blood runs through my veins like incandescent lava.” This lack of recognition by the literary world was just one aspect of the tragedy of Salgari’s life.

When Salgari was young he dreamed of being a sailor, and eventually the captain of his own crew, to escape the mundane life he saw his father leading. Unfortunately, he did poorly in his studies which precluded him from attaining his dream of life on the high seas. Eventually, he was able to attain a position on a fishing boat that basically cruised up and down the Adriatic, but this was a far cry from his imagined life. It did, however, lead to a bit of adventure. When he returned from his time on the fishing boat he had bragged of how he sailed the ocean. Another sailor, who had encountered Salgari during his time on the boat mocked him, saying that he was nothing more than a cabin boy. Salgari, who was quite good with the sword, challenged the man to a duel in which the future author wounded the man who mocked him.

In the years that followed, Salgari worked as a journalist, eventually becoming a novelist. Despite the lack of recognition from the literary world, he was enormously popular. In his day, he had been read by more people than Dante. Even today, he is one of the 40 most translated Italian authors. Salgari’s fame, however, was not accompanied by fortune. He was impoverished, grinding out novel after novel to support his wife and four children. In one year, he wrote 10 novels. If you have ever written anything of any substantive length, you could appreciate that even today, with laptops and Internet access, this would have been a tremendous accomplishment. In Salgari’s time, with nothing more than a pen and paper, it is phenomenal.

Suicide was a member of the Salgari family. His father, uncle and eventually two of his children, ended their own lives. This, combined with coping with a difficult existence, the lack of recognition and the constant poverty, gave Salgari a tenuous grip on life. The breaking point came on April 19, 1911 when a city-appointed physician declared that Salgari’s wife, a woman he loved deeply, was “afflicted with a furious mania with the tendency to commit impulsive acts that make her dangerous to herself and others.” With that, she was committed to an insane asylum.

On April 25, 1911, Salgari, after writing his letters of goodbye, broke his writing pen, went into the woods and slit his own throat. It saddens me to think of this man who wrote of noble heroes, of life’s adventure and of the world’s beauty would come to such an end. It is fortunate for us that his legacy, his body of work, remains.

Tweet
More in this category: « The Rise of Coaching in Italy with Sonja Caramagno September Birthdays »