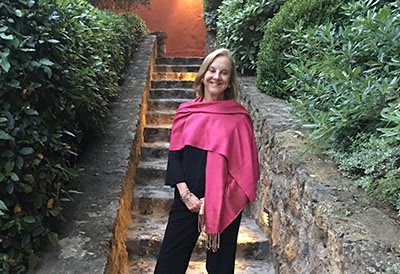 As I look across my shelves of books on Italy, I note there are authors whose works stand out from the rest. Some are especially informative, while others have an engaging writing style, others still are just plain fun to read. However, there are a few, a very few, that are a combination of all three. One of my favorite go-to authors, for this reason, is Dianne Hales. Although not an Italian, per se, having received honorary Italian knighthood, with the title of Cavaliere dell’Ordine della Stella della Solidarietà Italiana (Knight of the Order of the Star of Italian Solidarity), brings her close enough for us to adopt her as one of our own.

I first encountered Hales’ work when I read “La Bella Lingua: My Love affair with Italian, the World’s Most Enchanting Language” which won her a spot on the New York Times bestsellers list. In this book, she demonstrates her unique ability to express in words the Italian essence. Despite the title, her work goes beyond a mere analysis of the language to actually giving the reader the cultural and historical context of that language in an engaging manner.

While I certainly found the discussion of the language fascinating, it was more of a vehicle for bringing to light various aspects of Italian culture, things that I did not know. For example, Hales discusses the expression fare Bella Figure, explaining the Italian view that how one lives is an art form. She concludes with a quote by Enrico Paoletti, president of the Società Dante Alighieri, who said “… you are learning the Italian secret. Our greatest art: the art of living.” In many instances such as this, her book broke down the garish Italian caricatures so often encountered in popular media.

Dianne Hales’ second book, “Mona Lisa: A Life Discovered,” has been translated into six languages. In this particular work, she gives new insights into the woman behind the enigmatic smile that draws thousands to the Louvre. She relates her explorations of Florence to unearth the life of that city’s most recognizable citizens. In describing a life set in Renaissance Florence, we also see the workings of that city while in the process of redefining Western civilization.

Her most recent work, “La Passione: How Italy Seduced the World,” seems to me a sequel to “La Bella Lingua.” One of the many things that make the Italian language so beautiful is its ability to capture the passion of the Italian people. For Italians, passion is the grist of life. As an Italian American, I bear witness that this is not a hackneyed stereotype, but a reality truer than most non-Italians can appreciate. Our emotions are amplified; we don’t like, we LOVE. And if you make an Italian your enemy…oh madone! There is a reason why they said in “The Godfather” that Sicilian women are more dangerous than shotguns.

Dianne Hales’ book takes us through Italy demonstrating how Italian passion has shaped their history and culture. As I read her book, I grew to have a deeper understanding of my own culture. She cites multiple examples of how Italians’ passion drives them to become leaders and innovators in their respective field. Of course, she discusses how Italian passion has made our people luminaries in painting and sculpting as well as recalling how we have led the world in literature, poetry and music, but such references have become almost cliché. Hales goes beyond the commonplace to lesser-known areas in which passion has driven Italians to professional excellence, to world leadership. She discusses the glass-makers of Murano, the potters of Deruta and the lace makers of Burano. Through her work, I came to realize that Italian creation is the expression of Italian passion.

As I had noted at the beginning of this article, there are some authors whose works simply stand out in my mind. Going through my library, you can tell which books they are; the corners are a bit more dog-eared, a page or two may be about to fall out and there are many comments in the margins. My copies of Dianne Hales’ works bear all these scars.

Tweet
More in this category: « March Birthdays Meet the Author: William Giovinazzo of "Italianitá: The Essence of Being Italian and Italian-American" »