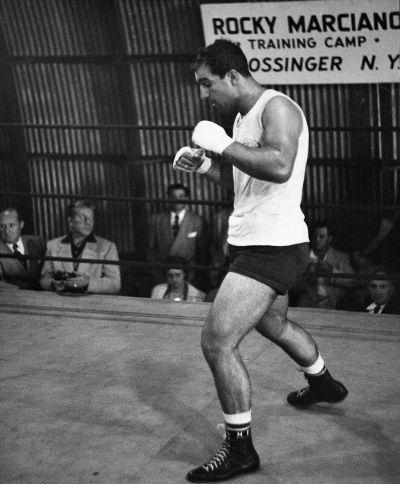 Marciano achieved the unimaginable as an undersized fighter with bad footwork, overcoming the odds against him and thus making him one of the most celebrated and greatest heavyweight boxers of all-time.

Marciano’s training routine and determination were the conduits to his success in boxing. He ran five to six miles every day, side-by-side, with his trainer and best friend, Alie Colombo who encouraged Marciano every step of the run. Marciano ran uphill at full speed, then back down the hill backward. He believed in cross-training and would jump into the swimming pool, up to his shoulders in the water, shadow-punching for 45 minutes. Marciano’s work ethic was nothing less than remarkably consistent and disciplined. He truly enjoyed his grueling workouts.

Marciano tirelessly honed his boxing skills with gym work sessions which included hundreds of hours sparring, continuously hitting the heavy and speed bags, thousands of push-ups and sit-ups, countless medicine ball thumps to the gut, all highly effective to his preparation for success in the ring.

Marciano trained in a remote Catskill area in Grossinger, NY, a requirement imposed on Marciano by his trainer, Charley Goldman, and his handlers, relocating their task-directed contingency into virtual isolation by design. In this remote setting, Marciano’s focus and dedication to the tasks at hand were remarkably intense.

“He was almost completely cut off from wife and daughter while at camp, with no visits and only nightly telephone calls and occasional letters were allowed. Marciano went training for a fight with vigor and passion,” vividly writes Russell Sullivan in his book, “Rocky Marciano: The Rock of His Times”.

When he was not training vigorously, Marciano was also serious about eating properly and getting to bed at 9:30 p.m. each night. His diet was strictly monitored by Colombo. Marciano completely refrained from the night life and steadfastly abstained from sexual activity, firmly believing in the adage, “women weaken legs”.

Marciano’s handlers did, however, put his ironclad resolve against sexual activity to the test one night. A group of sportswriters verified a story: “Some of the people around Marciano sent Hollywood blond bombshell Jane Mansfield into a room where Marciano was alone. The objective of her mission was obvious. Mansfield nevertheless failed, emerging from the room after a while and saying, ‘What is he crazy? He didn’t want anything to do with me’,” reveals Sullivan.

Marciano’s critics have asked how Marciano would have handled modern era, super-sized heavyweights. After all, he possessed the shortest reach in heavyweight boxing history at just 67 inches and he only stood 5 foot and 10.5 inches tall and never weighed more than 192 pounds, fighting at 186 and 187 pounds in most of his matches.

Younger brother Peter Marciano adamantly refutes this argument, saying: “Rocky fought a number of guys who were 30 to 40 pounds heavier than he was, and those were his easiest fights. It was guys who were a little smaller, a little quicker, who threw punches in combinations that gave Rocky a more difficult time. Forget size, Rocky was tremendously strong. His strength was that he was almost superhuman. Big guys were made for him. The bigger they were, the easier it was for Rocky to tire them out and then knock them out.”

Peter Marciano added: “Rocky lived like a monk. He was always in incredible condition. He was devoted to training, and he could always throw more punches than he faced. He’s never been given full credit for his conditioning.”

As the evidence clearly portrays, Marciano was one of the fittest professional athletes of all time. His training routines continue to define his unbeaten boxing legacy.

Tweet
More in this category: « On the Cover: Starlings in Rome A Look Back: Editor Speaks »