On the Cover: Starlings in Rome 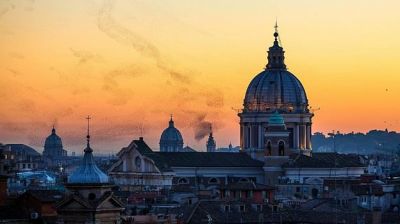 Between October and February every year, millions of starlings migrate from northern Europe to Italy in search of warmer temperatures for the winter. Their synchronized ballets, or murmurations, as they are more commonly known, send twisting shadows over the Eternal City's churches, palaces and ruins.
The glossy dark-feathered birds, which measure up to 8 inches in length, spend their days feeding in rural areas before heading back into town to sleep. "In the city, the temperatures are higher, and the light helps them find their way around and protects them from predators," explains ornithologist Francesca Manzia.
Warmer temperatures in northern Europe have shortened the starlings' stay in Italy, but their sheer numbers make them a force to be reckoned with. Over one million are believed to be in Rome this year, according to experts.
Naturally "gregarious", they stick together at night, creating collective dormitories in the trees. “They do not carry disease,” insists Manzia. “But because of their droppings, they make the roads slippery and smell very strong."
Even on a clear day, it is not uncommon to see Romans walking along tree-lined streets with umbrellas as protection against the birds. City authorities use sounds and lights to divide the animals into smaller, more manageable groups. Audio transmissions are "the most simple and effective" way of moving the birds on, said Valentina de Tommaso from Fauna Urbis in an interview with euronews.
The pre-roosting performance, scientifically called starling murmuration, takes place between November and December, and despite all complaints, it remains one of the world's greatest natural phenomena. On spring's arrival, the birds will depart to their breeding grounds in Scandinavia. A popular watching place is Piazza dei Cinquecento near Termini station.
While the starlings cause quite a mess in the beautiful Italian city, the murmuration is a fanciful natural phenomenon to observe.