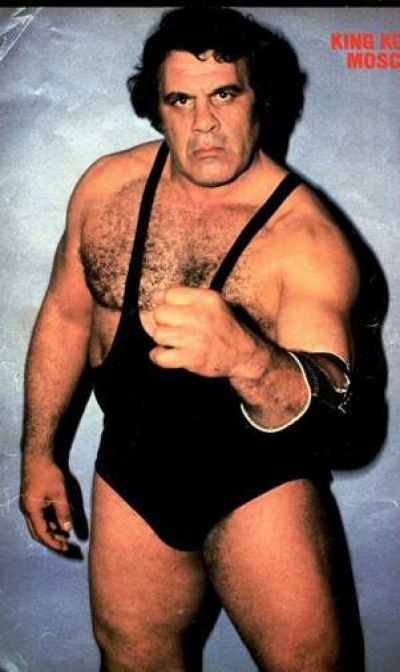 After retiring from the Canadian Football League, Angelo Mosca reinvented himself into a star with a villain personality in Canadian professional wrestling. Benefitting from his already-established reputation in the CFL, it was an easy transition for the motivated Mosca. He was almost an instant success in wrestling.

Mosca was introduced to wrestling by Montreal promoter Eddie Quinn, wrestling all across North America, earning the nickname Angelo “King Kong” Mosca and later “Big Nasty.” Mosca was always placed at or near the top of the wrestling card from 1972 until the early 1980s.

King Kong Mosca made his long-awaited debut at Toronto’s Maple Leaf Garden on June 21, 1971, against the Sheik, the villain of villains. Allan Ryan, a reporter, wrote of Mosca’s debut in the Toronto Globe and Mail:

“Mosca gave the Sheik trouble. Angelo Mosca, evidently so unnerved at hearing Torontonians cheering for him, erred on a flying tackle, wrapped himself around a ring-post and ultimately, lost his wrestling assignment against the Sheik last night.”

“Wrestling is very much an individual business, and more than that it’s a dog-eat-dog business…You learn not to trust people and you sell yourself for money. When I broke in, a lot of wrestlers had never been athletes. They didn’t have to be. Some wrestlers, all they did was tell stories about other guys, so eventually I learned to travel alone so that stories never got back to the promoter’s office. That’s why I was known as kind of a loner in the business,” writes Mosca in his 2011 book with Steve Milton, “Tell Me To My Face”.

“You have to have an imagination in wrestling. It is your job to create an image. That’s why there were a lot of stereotypes, a lot of them racial. Once you have an image, you need to nurture it. A good way to do that was to keep using the same line, the same verbiage, over and over again until people knew what you might say at any given moment,” writes Mosca.

Mosca fought the likes of wrestling greats like Ivan Koloff, Big John Studd, and the Iron Sheik and beat all of them. In fact, Mosca teamed up with the great Andre the Giant and memorably defeated Big John Stud and Crusher Blackwell on November 6, 1980.

In the early 1980s, in the World Wrestling Federation (WWF), Mosca gained momentum using a “sleeper” as his finishing move. Mosca began wrestling all over the world and became an international wrestling star, showcasing his skills in Australia, Hawaii, the South Pacific, and Japan.

In 1981, Mosca became a top challenger to WWF Champion Bob Backlund’s world championship belt but was unsuccessful. On June 19, 1981, Mosca would face off against arch-rival Ivan Koloff in a tough, bloody battle that he won.

Mosca won an anticipated Canadian Wrestling Championship match with champion Big John Studd in a steel cage on January 17, 1982. The two faced off on the ramp as Mosca waited for Studd to climb the stairs. Mosca attacked Studd, and the bout was on. Mosca, bloody and beaten, emerged from the cage as the new champion beginning his fourth reign with the title.

In the mid-1980s, Mosca became a part-time color commentator and promoter. After being fired by the WWF, Mosca promoted the NWA in Ontario from 1985 to 1987.

Mosca organized a NWA card in Hamilton in February 1986 called “Moscamania” that drew a house of 12,000 spectators. He retired from wrestling the same year.

Mosca’s son, Angelo Mosca, Jr., had a brief but successful wrestling career himself. Mosca, Jr. was enthusiastically managed by his father, who reminded everyone of his support and love for Angelo, Jr., because “blood is thicker than water.”

In his distinguished career in professional wrestling, Mosca achieved great success around the world. Bill Apter, a wrestling commentator, said “Angelo Mosca was one of the meanest, toughest, human beings in the world, but he had the heart of a teddy bear. He is one of the nicest guys I have ever met.”

Steve Milton’s insightful remarks say “The most conspicuous thing about Angelo Mosca has always been his size. He was a big kid, a big football player, a big wrestler, and he is still a big man. Bigger than life sometimes. Angelo doesn’t do small things. Not in his body, his face, his voice, his strengths, his weaknesses, his passions, his anecdotes, his history, his secrets.”

“It’s fitting that Angelo came of age just as television was moving heavily into his two sports: football and wrestling. During and after his athletic careers, TV kept him famous and he, in turn, made good for TV. His face filled the screen unforgettably and his it-could-only-be-Mosca voice added to the overall impression,” writes Milton.

In February 2015, Mosca was diagnosed with Alzheimer’s disease. Mosca has lived in and around Hamilton for many years and currently lives in St. Catherines, Ontario, with his wife, Helen, a real estate agent. After a long bout with the disease, Mosca passed away peacefuly at Massaca Lodge in Hamilton, Ontario, on November 6, 2021. He was 84 years old. Mosca is survived by Helen, and his children, Angelo, Jr., Gino, and Angela.

Tweet
More in this category: « Pete Pucella: A Lifesaver for Famed Author A Look Back: Studying Abroad, a True Gift »