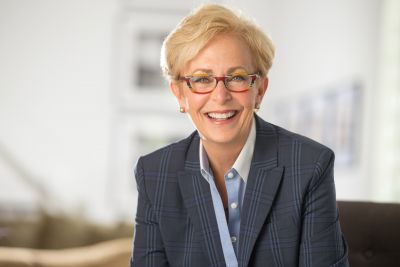 In years past, the community would gather in the Cleveland City Hall Rotunda to celebrate Italian American heritage and honor these outstanding individuals. Due to the ongoing pandemic, however, this year’s event is private and is limited to honorees and their guests. Please check CIAH Committee’s website  www.CLEItalianAmericans.com where a video of the Oct. 4 ceremony will be posted.

As President and Chief Executive Officer of Playhouse Square, Gina is responsible for all operations of the not-for-profit performing arts center, including more than 1,000 annual performances with gross sales of $48 million, and supervising a full- and part-time staff of 425 as well as the much loved “RedCoats” volunteer corps of 2,000. She has led initiatives that have helped to position Playhouse Square as the region’s premier cultural, tourist and entertainment destination and the country’s largest performing arts center, second only to NYC’s Lincoln Center.

Gina secured and built a Broadway series for E.J. Thomas Hall at the University of Akron and continues to champion programming collaborations with libraries, colleges, resident companies, and area non-profit theaters. In recognition of her contributions to the community, Baldwin Wallace University presented her with an Honorary Doctorate of Humane Letters in May 2021.

Nationally, Gina is a Tony voter and serves as Road Vice Chair of the Broadway League. She also sits on the League’s Board of Governors and Executive and Legislative Committees.

Maxim’s opened in 1949 on E. 185th St., then one of the busiest neighborhoods in Cleveland. Their story begins with Joey “Maxim” Berardinelli's rise through professional boxing. Capitalizing on his success and reputation in the boxing world, Joey and his brother Emanuel “Manny” Berardinelli opened Maxim's Delicatessen in 1949 to service the neighborhood that showed its support throughout his career. He was one of the elite boxers of his time, even defending his title against the legend Sugar Ray Robinson at Yankee's Stadium.

With a household name and the authentic homemade Italian pizza, breads, and baked goods, Maxim's became a success. Manny always believed in three things: Quality, Authenticity, and most importantly Customer Service. Manny took pride in knowing all his customers and their families on a first name basis.

All of Manny's children worked at the store at some point throughout the last 70 plus years in business. His son, Gene, joined his father full-time running the business at the age of 18. Manny's youngest child, Loretta, worked part-time between raising her children. She still works today alongside her brother Gene and has for the last 40 plus years.

In 2004, Maxim's moved to Mentor, OH. Gene and his wife Kathy took over the business during the relocation from E. 185th St. Manny continued to work at the store, carrying on the same founding values, until his retirement in January 2014 at the age of 93. Manny passed in July 2020 at the age of 99. Gene and Kathy's youngest daughter works at the store now, bringing the third generation into the family business.

Today customers still enjoy the staples that built Maxim's, like breads, pizza, bakery, party trays, and deli items. Along with those staples, Gene and Kathy have expanded the business to include hot dinners and an extensive catering menu.

Holly has been a longtime and active parishioner of Our Lady of Mt. Carmel West. For more than 20 years she has volunteered to teach adult Italian classes on Monday evenings. She loves to share the Italian language along with its culture and traditions with her students.

As part of the other Italian traditions at the parish, Holly frequently lectors at the Italian Sunday Mass. She also helps to organize the St. Joseph’s Table along with festivities for St. Anthony and Padre Pio.

Holly obtained her Bachelor of Arts in Political Science from Cleveland State University.  While working towards her degree, she took several Italian classes. She is a member of the Cleveland Italian Ancestry Organization (CIAO) and the Italian American Women’s Network (IAWN). She enjoys traveling to Italy and Sicily.

Holly has been married to her husband John for 40 years. They have two daughters, Natale and Clare. She lives in Rocky River, OH with her family.

The son of Sicilian immigrants, Vince was the first in his family to go to college and the only one to go to law school. He received a B.A. in history from the University of Pennsylvania in 1978, followed by a J.D. from the Cleveland-Marshall College of Law in 1981.

Vince began his career in private practice. Then in 1984, Ohio Attorney General Anthony J. Celebrezze, Jr. appointed him Assistant Ohio Attorney General, where he remained for 27 years until he retired in 2011. During that tenure, he represented the Ohio Civil Rights Commission, the State Employment Relations Board, and the Bureau of Workers’ Compensation. He also assisted in closing over a dozen drug houses in the City of Cleveland through Ohio Attorney General Lee Fisher’s Operation Crackdown Program. In 2001, he received Ohio Attorney General Betty D. Montgomery’s Professionalism Award for exemplifying the professional standards that the OAG seeks for all employees.

He is a CMLAA Life Member and member of its Board of Trustees, and he has held every CMLAA leadership position, including President. He has received the Cleveland-Marshall Moot Court Alumnus of the Year Award, the CMLAA President’s Award three times, and the CMLAA Greatest Mentor Award.

Vince has been married to Barbara J. Stanford, an artist, for 39 years. Together they enjoy attending Cleveland Orchestra concerts and visiting art museums.

Judge Russo is the immediate Past Administrative and Presiding Judge of the Court of Common Pleas of Ohio in Cuyahoga County. Unanimously elected by his colleagues to lead the Court from 2014-2019, he was responsible for coordinating the development of Court policies and overseeing the administration of the General Division, the highest-level trial court in the state.

Judge Russo manages his criminal and civil dockets, as well as, since 2018, Cuyahoga County’s Veteran Treatment Court/Specialty Docket. In addition, he has chaired or participated in numerous justice system boards and committees since beginning his judicial career in 2005 on the Common Pleas Court. Some include: 1st Vice-Chair and Co-Chair of the Court Administration Committee of the Ohio Judicial Conference; Vice President of the Cleveland Metropolitan Bar Association; Cleveland Marshall  Law Alumni Association where in 2018 was inducted into CM/Law Hall of Fame and in 2019 was CMLAA Alumni of the year; Member of the Public Health, Death Penalty and Bail Bond Reform Task Force (all appointed by the Ohio Chief Justice); Past President and Man of The Year recipient of the Legal Eagles St. Edward High School.

Other organizations in which Judge Russo has served in an office include the National Association for Presiding Judges and Court Executive Officers (NAPCO), a national organization of court chief judges and court executives, where he served as president from 2015-2016. In 2019, Judge Russo was elected to, and currently serves as, NAPCO’s Chair of the Board of Directors. In addition, he has taught at numerous court conclaves, judges’ conferences, community programs, and bar association CLE programs.

Judge Russo is a member of the Ohio State Bar Association, Cuyahoga Metropolitan Bar Association, Westshore Bar Association, and Cleveland Marshall Law Alumni Association. Prior to the bench, Judge Russo was a civil and criminal litigator in his private practice. After earning a Bachelor of Science in Business Administration, he received his Juris Doctor degree at Cleveland-Marshall College of Law, where he currently serves as an Adjunct Professor.

Michael Filippelli is an honors student from North Royalton, OH, who has a passion for sharing his Italian heritage. He assists with the “Memories of Italy” radio program on WJCU 88.7 by helping to select the music and preparing the calendar of events.

Michael is in his senior year at Western Reserve Academy (WRA) located in Hudson, OH.  He created the first Italian American club at the school after realizing most students knew little about Italian American culture and history. The club meets several times during the school year to enjoy authentic Italian food together and learn about the history of Italian Americans. Because of Michael, the club has grown to over 100 students, which is about a quarter of the population of the school.

Michael’s strong Catholic faith led him to become a member of the Reserve Christian Fellowship. During the summer of 2020, Michael traveled with the group to Florida to assist Habitat for Humanity with building a house for an impoverished family.

Turning a negative into a positive, when Michael lost his opportunity to play football due to suspension of the program at WRA, he decided to become a coach for his younger brother’s youth basketball team. He thoroughly enjoys sharing his love of sports with the team members. Michael also helped to create the sports broadcasting program at WRA, which is enjoyed by many viewers.