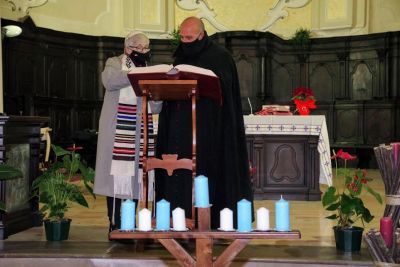 Thanks to a Calabrian parish and its leader, the Chanukah lights shined a bit brighter [in December] for a southern Italian congregation led by a former Pittsburgher.

With the eight-day holiday nearing its end, Sinagoga Ner Tamid del Sud — the first synagogue to openly function in Calabria, Italy, since the Inquisition — faced a dilemma. For years, the “Eternal Light of the South” had held an indoor menorah lighting ceremony. When the Calabrian-based space was deemed too small this year due to COVID-19 social distancing requirements, the congregation had to pivot.

There were thoughts of holding the annual event outdoors, but the near-wintery weather in mountainous Calabria can be cold, windy and rainy, said Rabbi Barbara Aiello, a former Pittsburgher who returned to her patriarchal homeland and became Italy’s first, and only, modern liberal female rabbi.

Sinagoga Ner Tamid primarily serves b’nei anusim — people whose ancestors were forced into conversion centuries ago and who have recently discovered their Jewish roots. Chanukah, with its message of upholding tradition despite outside influences, is an especially important holiday for this population, said Aiello.

Aiello accepted the offer, and [in December], while social distancing, she and Costantino welcomed Calabrians to the holiday event.

“Adon olam, Spirit of the Universe, God of our understanding, You are called by many names. The words we use to honor you are different and diverse. Help us see that beneath all these differences we are all connected,” said Aiello, followed by Costantino’s Italian translation.

Along with kindling 50 menorahs to mark the seventh night of Chanukah, joining Costantino in the blessing was moving, explained Aiello. As an interfaith partner, Costantino not only ensured the vitality of this year’s Chanukah celebration, but has been a friend during darker periods as well.

“In the days following the Tree of Life tragedy, Don Antonio and our mayor, Felice Molinaro, approached me to organize a memorial for those who were killed,” Aiello said.

There’s a personal connection that’s felt between southern Italians and Pittsburghers, the rabbi noted. “At the turn of the last century, literally dozens of families left the poverty of Calabria to find a better life in America,” Aiello said. “Interestingly, the majority of these families settled in Pennsylvania, many in Pittsburgh.”

Aiello hopes when travel restrictions are lifted, “Pittsburghers will consider a visit to Italy, especially to Calabria,” she said. “I hope that they will come to Serrastretta to connect with Calabresi who feel such a strong connection to them and who are ready to share a smile, a hug and, of course, a meal.”