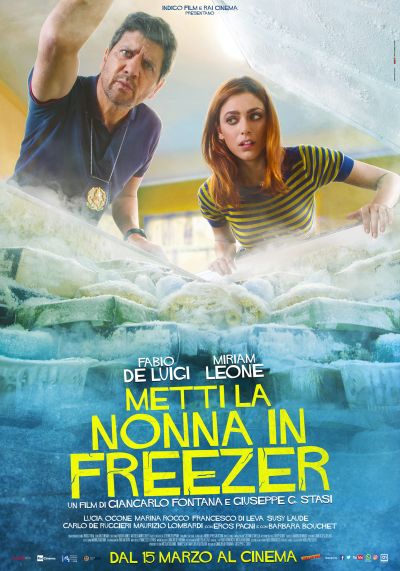 All film tickets are $15 and showings are Thursday evenings at 7:30 p.m.

We would like to extend our gratitude to Italian Travel by Diana for sponsoring the film festival this year.

The Cleveland Italian Film Festival is the first independent film festival in Northern Ohio to exclusively showcase Italian award-winning films in Cleveland area theaters and has sold out every year since its inception in 2006.

There will be no physical tickets this year.

Please bring Cash or Check for the EXACT amount of $15. No change will be made.

Please drop your money in a box on the lobby table. Masks required in the lobby/restrooms and are at your discretion inside the theater.

Here are the great films coming your way!

Peppino, whose real name is Giuseppe Garibaldi, is living quite contently in a small mountain village enjoying his fishing when he suddenly finds himself elected the President of the Italian Republic due to an incredible error! He is catapulted to Rome where his disarming honesty and incurable optimism leads him to obtain unexpected results, all the while trying to fight dishonest politicians. In the end he conquers everyone with his sincerity and simple ways. But since protocol isn't his strong point, many hilarious situations arise to make this a lighthearted, entertaining film.

This is a wonderful film of two connecting love stories both rich in emotion and touching moments. Betty, an Italian professor of Italian is happily living the quiet life of a single woman after having been disillusioned by men. Until she meets Umberto, a handsome, charismatic professor at the university. Umberto and his wife, Ludovica, live together in a marriage that has become cold and distant. Their son, Romeo, is arrogant and spoiled. As time passes, Betty and Umberto realize their relationship is becoming serious. At the university, Romeo has a newly acquired friendship with Vincenzo, a sensitive, shy intellectual who has quietly fallen in love with Caterina, his good friend. This love story takes a turn when Romeo starts to court Cate with his handsome looks and personality and sweeps Vince’s love off her feet, taking a quixotic turn.

Directed by Massimiliano Bruno and starring famous Italian actors, Michele Placido and Raoul Bova, this Italian movie is a very funny, well-written, moving film about an Italian family caught in the public spotlight.

After a session with a showgirl leaving him brain damaged and no longer able to lie, Michele Spagnolo is left with no inhibitions and starts telling the truth about everything that goes through his head resulting in hilarious consequences. His family unwillingly rallies around to help him try to save his political career and preserve the peace as he starts airing all their dirty laundry in public. Placido’s character by the end of the movie gives way to a powerful portrayal of Italian family life in the 21st century. Great comedic acting and many laughs!

Claudia lives with her beloved grandmother, both of them existing on Grandma’s pension and her job as an art restorer. When Grandma suddenly dies, Claudia finds herself in a financial quandary waiting for money owed her by the city municipality. Grandma’s death means her pension ends, unless she can find a temporary solution until her money arrives. The only solution she can come up with is to temporarily put nonna in the freezer along with kilos of lasagna and tortellini.

Simone, a government officer who considers himself uncorruptible makes a visit to Claudia’s home to confirm Grandma’s passing thereby ending her pension. But instead he finds Grandma “alive.” The situation gets complicated when upon suspecting a trick is being played on him, he finds he’s madly falling in love with Claudia. A comical film with a poignant ending.