From the Tomato Fields to the Air Waves and Back Again 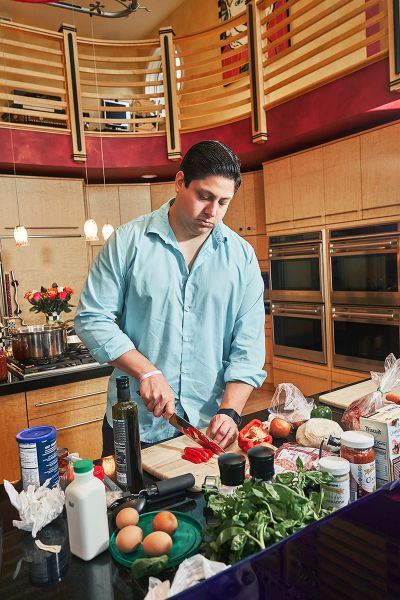 Not too long ago, Paul Guglielmo was best known as “Pauly” the co-host and producer of the Brother Wease Radio Show on 95.1 WAIO in Rochester, NY. Paul’s love for radio started at a young age. While studying at John Carroll University, he began working at the school’s radio station. After graduating, Paul took a job near his hometown of Conneaut, OH at the local 102 ZOO in Ashtabula. Paul’s experience and passion for radio took him to the Brother Wease show, a very well-known morning show, in Rochester. He eventually became co-host, working with the Rochester radio show for 15 years.

Paul has always been proud of his Italian heritage. Like many Italian Americans, Sundays were spent with family at his Grandpa Pete’s. Immersed in the smell of homecooked sauce, the family enjoyed laughing together, eating together and just being together. The younger generation, Paul included, admittedly did not realize just how “spoiled” they were to have this special time with family. Grandpa Pete was always at the helm stirring his tomatoes and telling stories of how his mother’s recipe came around, and Paul soaked it all in.

It was the Great Depression. People across the country and the world were fighting to survive. Home gardens became a necessity. Paul’s great-grandparents were no exception. Great-Grandma Maria (Mary) Petrocelli-Guglielmo had immigrated to the U.S. from Campobasso, Italy and created a home with her husband and eight children in Conneaut, OH. Paul’s Grandpa Pete was the youngest of Mary’s children. Their yard became her garden, every inch covered in fruits and vegetables. Tomatoes, garlic, peppers, onions, and more tomatoes! covered the area around their home – all the necessary ingredients to create the perfect sauce recipe. Back then, everyone in the neighborhood grew their own crops. Some were known for green vegetables, others for herbs; Great-Grandma Mary was the tomato canning lady. Great-Grandma Mary’s sauce was like no other. Soon neighbors, family and friends were clamoring for her to make them a batch. “Part of being Italian is absolutely loving to cook for other people,” Paul says. “Great-Grandma Mary obliged every single request to make sauce. Always for free. At most, she would trade for another vegetable.” The family all had a hand in helping Mary fulfill sauce requests.

However, as time went on, her older children grew and moved out with their own families and she lost her husband leaving just Grandpa Pete and Mary living in their small house amongst their homegrown vegetables. Sauce orders still coming in. Young Pete watched his mother spend every day and night out in the barn prepping and canning her tomatoes and sauce. He quickly jumped by her side. It did not take long for him to perfect the recipe.

As time went on, Mary passed away and Pete and his wife, Lucy, started a family of their own; one daughter and two sons including Paul’s father, Chuck. Pete continued to make Mary’s sauce every Sunday until he passed away at the age of 91 in 2015. When Paul was in his early 20’s, he asked Grandpa Pete to show him the ropes. “I didn’t realize how rich of a family tradition I had just tapped into. Grandpa was so happy I asked. He always thought the recipe would die with him. Grandpa Pete took me under his wing and my first lesson was in the tomato fields.”

The family sauce became a hobby for Paul. The hobby quickly turned into a side hustle. Paul had his radio show and sold his family sauce label, Guglielmo’s, on the side. He formed a close relationship with the owner of the small factory that produced the Guglielmo’s label. One thing led to another and an opportunity presented itself – one that Paul could not refuse. He found himself in a predicament. Radio had always been his main job and the family sauce a side gig. But, he had been falling out of love for the corporate side of radio for a while by now (although his love for the air waves remains strong!) and he began to realize that radio had become the hobby and the sauce had his heart. He officially flipped the two and as of May 1, 2020 is now the proud owner of that small production factory which has 60 clients and produces 190 labels, including Guglielmo’s. Paul’s sauce is sold online and on retail shelves, most notably Wegman’s, the biggest retailer in the Rochester area. Constantino’s Market in Cleveland also carries the Guglielmo’s label.

From the days of Grandpa Pete and Paul filling basket after basket of the perfect sauce-bearing tomatoes to today, Paul carries on the tradition of his family’s sauce. And there is no doubt he and his wife, Ryann, are excitedly awaiting the day he can pass along the family stories and recipe to their 18-month-old son, Leo.

While Paul is still beloved in his home city of Rochester for his on-air time with Brother Wease, his passion for his Italian American roots will undoubtedly make a name for the Guglielmo’s in the sauce business.

View the embedded image gallery online at:
https://www.lagazzettaitaliana.com/local-news/9449-from-the-tomato-fields-to-the-air-waves-and-back-again#sigProId609a2c2cb5
Tweet
More in this category: « Local Chef Cooks Online With a Fun Twist Local Teachers are Superheroes Too »