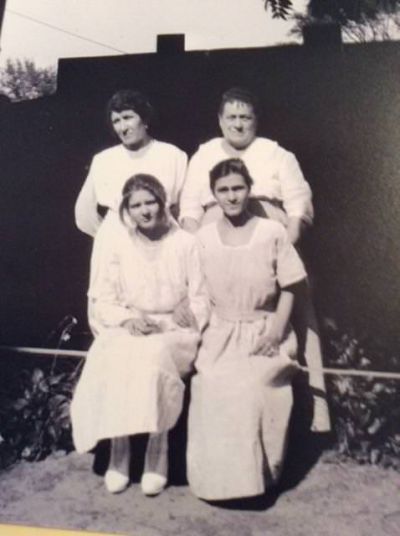 While doing some research through the Cleveland Public Library on my great-aunt Minnie Monti and her involvement with the early history of the library, I stumbled across some very interesting information on her mother, May MacDaniel Sweet.

May Sweet was 37-years-old and living near Ashtabula in New Lyme Station, OH in July 1902. In a letter to a personnel officer at the Cleveland Public Library, she alluded that she was desperate for a job due to a dire situation. Reading between the lines we can imagine the desperation May felt having a son and daughter to support. However, as she was not a resident of Cleveland, procuring a library position created a problem.

It took until January 1903 before a temporary position at the Alta House was offered to her. The Alta House was a combination settlement house for Italian immigrants and a library that was initially funded by John D. Rockefeller and Joseph Carabelli, owner of Lakeview Granite and Monumental Works.

After May established residency in Cleveland, she was offered a full-time job and stayed there until her retirement in 1940. During that time, according to her obituary in 1952, she taught classes in English and translated three Italian novels into English. She also gained a reputation for annotated lists of Italian literature which she compiled for the American Library Association. This is amazing as she only spoke English when first hired!

However, the most interesting discovery was a 16-page report of May Sweet’s participation at the American Library Association’s “First World Library Congress and Bibliographical Congress” held all over Europe during June 1929. It is a detailed report of her experiences in France, Italy and Germany filled with anecdotal stories of excitement, frustration at lack of organization and walking long distances in the heat.

I have only given a small glimpse into the life of May Sweet, but it is important to share the professional life of her daughter, Minnie Sweet Monti. As you can imagine, Minnie’s first experience with the Cleveland Public Library was due to her mother’s written influence requesting a job for her daughter.

According to Minnie’s obituary, she began her career at the Cleveland Public Library as a Page at Alta House in 1903. She spent most of her career in the Main Library’s Order Department first as an assistant and then as its head until her retirement in 1956.

In 1908, Minnie graduated from the Western Reserve University School of Library Science. In that time period, that was a huge accomplishment for any woman. She went on to be a co-director for eight years of the Cleveland Book Fair for Boys and Girls, a program sponsored by area library systems, The Cleveland Press and the Cleveland Chapter of the Women’s National Book Association in which she served as its first president.

Besides being a wife to Attilio Monti, assisting him in his granite business and mother to three boys, she also learned to speak Italian, German, French, and Spanish. This ability to speak multiple languages enabled her to be an official translator of technical patents for seven industrial corporations.

May Sweet should be admired for her boldness to find a way to support her family and for being an excellent role model for her daughter, Minnie Sweet Monti. Both women exemplified courage and tenacity at a time when being an intelligent professional woman was not the norm. I think that fact was best brought to the forefront by a comment by May while meeting a group of professors at the Sorbonne during a meeting at the First World Library Congress in 1929. In May’s notes she writes, “they expected ‘Librarians from America’ would be men and were hugely surprised when we walked in!”

On this Mother’s Day we should give thanks to our mothers and other female role models that paved the way for us as women today. I was always amazed at what Aunt Minnie accomplished, but her greatest influence on me was when she helped me get a pen pal from Australia through a library program she sponsored. It opened new doors for me as the lives of May Sweet and Minnie Sweet Monti opened new opportunities of learning to whoever they encountered in their professional career.

View the embedded image gallery online at:
https://www.lagazzettaitaliana.com/local-news/9420-pioneer-women-of-the-cleveland-public-library#sigProId6c9ba3e6ed
Tweet
More in this category: « LGI's calendar - Things to do Traditions in an Italian American Family »