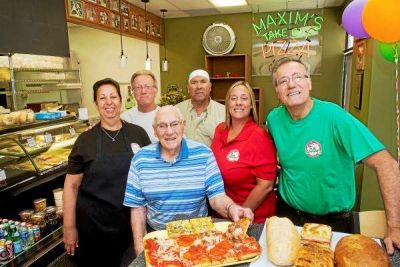 This past year, Maxim’s Food and Pizza celebrated 70 years of serving good food to generations of customers. I can personally attest to the fact that the food is delicious as my family and I have been enjoying Maxim’s for almost 50 of those years.

I grew up in the neighborhood around E. 185 St. in Cleveland in the 1970s and 1980s. Maxim’s Pizza was an anchor of the neighborhood and a staple in my family’s diet. My mom would often treat me to Maxim’s for an after school snack. Sometimes the pizza would be a nice surprise for lunch or dinner.

I really enjoyed going to pick up the food with my mom and sister. The shop smelled wonderful, filled with the aromas of fresh baked breads, pizza dough and sauce, Italian luncheon meats, and of course cookies and other sweets. Once I inhaled, I instantly became hungry.

Besides the food, I enjoyed seeing and talking with the people who worked there. Gene and Emily were wonderful and provided great service, but I especially enjoyed seeing Manny, or Emanuel Berardinelli. Manny’s enjoyment of his work was obvious. He always greeted us by name and with a big smile. He took pride in serving high quality, authentic, home-made food. Our normal order was pizza and he made sure we got the freshest slices, right out of the oven.

Manny opened Maxim’s with his brother Giuseppe Berardinelli, better known by the name Joey Maxim, in 1949 at the corner of E. 185 St. and Cornwall Rd. Joey Maxim was a Collinwood boxer who became the light heavyweight champion of the world after defeating Freddy Mills in 1950. Joey used to run in the E. 185 St. neighborhood to train and got the idea to open a deli there during one of the runs. The money from Maxim’s boxing wins provided the start-up funds. Memorabilia from his boxing days adorned the walls and still does.

When Maxim’s first opened, the neighborhood was bustling with lots of shops and people. Over the years, the neighborhood changed and the population dwindled, mostly from people moving further out into the suburbs. In 2004, Maxim’s Foods and Pizza decided it was time they, too, moved on and relocated to Mentor, OH.

After the relocation, 83-year-old Manny took on a lessor role at the store, but continued to help out until he officially retired in 2014 at the age of 93. His son, Gene Berardinelli, who had been working alongside his father since age 13, and wife Kathy are now in charge, but they get a lot of help from family. Manny’s youngest daughter, Loretta, and son, Tom, work part-time. Five years ago, Gene’s youngest daughter, Angela, joined the staff and is proud to continue the family tradition.

I do visit Maxim’s in Mentor occasionally to enjoy a slice of pizza and recall childhood memories. Even though it is not the same location, you can still enjoy the wonderful Italian food aromas when you walk into the store. And most important, the friendly and welcoming Berardinelli Family continue to provide good quality, authentic foods and great customer service.