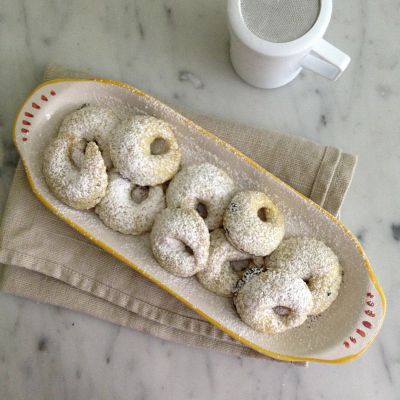 "You never know the places a cookie can lead"

In late 2008, my parents moved to Howland as new occupants of an assisted living apartment at Shepherd of the Valley. With my mother’s mobility severely compromised, my father and I set out to investigate their new home and many of the features the senior facility offered. We would be my mother’s legs and report back to her. In the hallway on one of the floors we encountered an open door and a very engaged occupant. This was Mary D’Altorio Masciangelo’s home and workshop. Yes, workshop. The living room in the apartment took on double duty as a seamstress’s studio with several sewing machines and many spools of brightly colored thread organized in transparent trays along the walls.

An accomplished tinkerer himself, my father could spot a serious hobbyist’s den and we were happy to find one at Shepherd. Mary gave us a welcoming smile and invited us in. That day we paid her the first of many visits. A member of the American Sewing Guild, she described with much pride her current project, a small lap quilt for a relative. As our eyes traveled the colorful space, they rested on a plate of Christmas cookies dusted in powdered sugar. Calling them Cieli Ripieni (heavenly filled), Mary let us sample them. They had a delicious grape filling. My father, an amateur baker, asked for directions to make them. On the spot, Mary pulled out a copy of her personal recipes in a red binder and presented it to him as a gift. I guess she could sense an experienced cookie baker. That was the beginning.

As the year progressed, Mary and my parents became close friends. Mom and Dad chose to sit at the same table with her in Shepherd’s dining room. Eventually, we met several members of her large Italian clan. We felt at home with them and soon began exchanging stories and recipes with this family with roots in Italy’s Abruzzo region.

Mary would pass on her well-read copies of a periodical that was at first new to us, La Gazzetta Italiana Newspaper. Not infrequently, they had underlined sentences or whole paragraphs from articles that had provoked interest from her sister Edith. Along with Mary’s family, we, too, looked forward to each new issue and it wasn’t long before my parents and I purchased subscriptions. We read knowledgeable articles on Italian culture and civilization and even local news. Then our own contacts began to subscribe as well.

Soon, I found that the D’Altorio Masciangelo family was itself a rich resource for information on the Italian community in the Warren Youngstown area. Edith and Carl Ritch (Ricchiuti), Mary’s sister and brother-in-law, were accomplished crafters and local historians. The couple had once been organizers of the Warren Italian American Heritage Festival that continues strong today. I began writing for La Gazzetta from their detailed archives. It was a pleasure because they had such rich material, documents and photographs, on their family’s immigration story. And they shared contacts with interesting people.

Sadly, Mary passed away in June of 2018. She left a legacy of a life well lived for her large family that included 20 great-grandchildren. A generator of many subscriptions, she was responsible for fostering an appreciation for the Italian American press as embodied in La Gazzetta Italiana. Every Christmas, I remember Mary’s friendship, her dedication to sewing and crafts and the delicious Cieli Ripieni. You never know the places a cookie can lead.

Ingredients for the filling:

A pinch of cinnamon

The result should be not runny. (The filling can also be used

when using a 4-inch cutter):

Mix dry and wet ingredients separately before joining. Knead dough and let rest at least a half hour. Roll dough and cut into squares or circles. Drop in filling and seal with a fork. Bake at 350F until lightly golden on cookie sheet lined with parchment paper. Dust with powdered sugar just before serving.

We made a few adjustments to Mary’s original recipe. 4 ¼ to 4 ½ cups of flour made the dough denser, easier to roll out. The original recipe calls for 2 tsp. lemon, but the equivalent amount of lemon zest would also work.