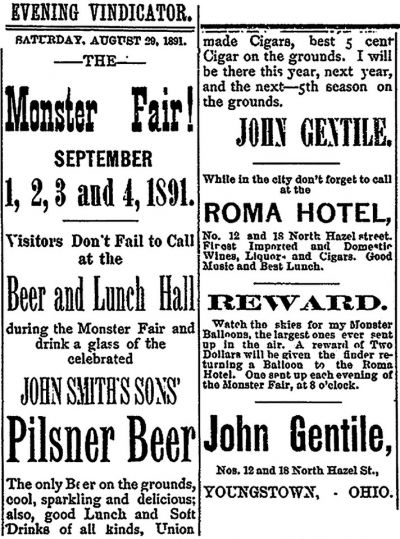 The first Italians to settle in the Mahoning Valley arrived as a ragtag army of strikebreakers during the 1873 Coal War. Seven thousand, five hundred miners were on strike when owners imported immigrants from Italy and African Americans from Virginia to replace the mostly Welsh workforce. These early Italians continued living in Trumbull County after the end of the strike. Soon, they found jobs on the railroad and migrated to nearby towns and cities in the tri-county area. By 1930, with further immigration, the Mahoning Valley counted 30,000 Italian and Italian American residents.

This series focuses on those early pioneers who became “prominenti,” respected leaders within the growing Italian community and who achieved recognition among the general public. Last month we traced the career of Marco Antonelli. This month our series ends with the story of John S. Gentile.

John S. Gentile, 1860-1915, ranks as one of the most singular immigrants from this early era. He was a symbol of the Gilded Age, a self-made rich man and celebrity who rose from nothing and whose exploits and personal life were followed by the press in the Mahoning Valley and as far away as Cleveland. While more than one Gentile resided in the Mahoning Valley, the trail of numerous newspaper reports points directly to John S. Gentile, the one-time coal miner who later rose to fame in Youngstown.

After leaving the mines, he found work in Joseph Garberino’s Youngstown fruit business. From there, Gentile eventually became the owner of an elegant café and a saloon in the heart of downtown Youngstown. He attained political notoriety in 1888, when Youngstown Democratic leaders nominated him to run in the local primary for the office of city assessor. Later, and wealthier, he would become a Republican.

By the 1890s, Gentile’s name was a familiar one to the Youngstown area. We find him aiding Italians who needed passports. In these years, the enterprising Gentile acted as a ticket agent for a German steamship line. He performed the duties of an interpreter in a famous murder trial of an indicted Italian in nearby Lawrence County, PA. He appears as the owner of the luxurious Roma Hotel Café at 14 North Hazel St., the location being adjacent to three Gentile businesses that included perhaps the very first Italian grocery and imported goods store in town. By 1894, his business address included a telephone number, one of the earliest subscribers of the new technology in Youngstown.

Gentile’s expertise in retail foods and wines can be seen in his participation in the four-day Monster Fair of 1891. His Youngstown Vindicator ad for the event painted him in the role of the city’s master showman and outdoor food vendor. Topping off the list off attractions was the launch of an unmanned lighter-than-air-balloon of record dimensions. Gentile offered a reward to the lucky person who reported the craft’s eventual landing. To conclude the expensive newspaper advertisement of 1891, he reminded readers to stop by his Hazel Street hotel to enjoy its fine stock of wines and restaurant fare. Two years later, during the crippling Depression of 1893, Gentile turned benefactor entertaining the public with free food and drink at a second giant balloon launch.

By 1897, “the only and original” Gentile had become a Mahoning Valley phenomenon as newspapers followed his movements. While other prominent Italians guarded their private lives, John Gentile lived his in full public view. On many notable occasions, his name landed in the Youngstown and Cleveland press, as reporters closely followed the celebrity’s domestic woes. This included news of restraining orders sought by Jane Mantella, his first wife, whom he had married in 1886. The union ended in a well-publicized divorce in 1896, an event that reached scandal proportions in an era when even American-born couples rarely ended a marriage. Gentile’s notoriety increased two years later, when he married Mary Lewis. At one point, attention centered on Gentile’s first wife’s second husband, a certain John Gentile of Warren, OH. Jumping on the coincidence, the Cleveland Leader ran an article titled “A Woman Obtains a Divorce from One Man and Marries Another of the Same Name and Nationality.”

The restauranteur and showman used his celebrity for good. In an age when an illness or a death in the family could throw an immigrant into debt, fraternal organizations offered sick benefits and also aided immigrants in securing loans from within the immigrant community. In 1891, Gentile organized the Fraterna Società, the first Italian benefit society in Youngstown, thereby providing leadership in addressing the needs of his fellow Italians.

As this series on Youngstown’s earliest prominent Italians draws to a close, it’s important to remember that these men, all of whom at one time worked in the coal mines of Trumbull County, faced obstacles unknown to later waves of immigrants from Italy. Colucci, Saulino, Antonelli, and Gentile arrived with no initial American contacts, no extended family here, no local Italian business network, and without the aid of fraternal, religious and beneficial associations. Taking advantage of Youngstown’s booming economy and the social mobility the U.S. then offered, these four non-native speakers of English created what was missing. In the process they rebranded “Italian” to mean “success.”