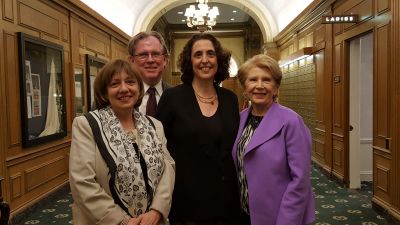 Dr. Franca Barricelli did not grow up in Cleveland, but feels a sense of home whenever she visits. The feeling comes from her familial ties to the area. Her grandfather, Dr. Giovanni Barricelli, was a prominent physician and Italian community leader until his death in 1934. Her grandmother, Dr. Orfea Barricelli, was a scholar of philosophy and literature and professor at Western Reserve University. Giovanni and Orfea Barricelli’s only son and Franca’s father, Jean-Pierre, was born in 1924 and grew up in the Barricelli’s home located on the corner of Cornell and Murray Hill Roads in Little Italy. The beautiful brownstone home now serves as a restaurant and inn and is where Franca chooses to stay when in the area.

An invitation to speak at a meeting of Il Cenacolo Italiano di Cleveland brought Franca to Northeast Ohio this past April. Her grandparents were active members of the group and grandmother Orfea served a term as president. The invitation to speak to the group was quite meaningful to her and she enthusiastically accepted. In fact, she opened her presentation by sharing a date book which belonged to her grandparents with only one entry – “Today, a meeting of Il Cenacolo.”

Dr. Franca Barricelli gave a wonderful and intriguing presentation titled “Opera as Political Art: Verdi’s ‘Attila’ and the Myth of Venice.” The opera “Attila” (1846) is about Attila the Hun’s 5th-century invasion of the Aquila at the eastern edge of the Roman Empire, an invasion that sent the peoples of the northern Adriatic fleeing to the lagoon which would be the site of the future city of Venice. She explained how the opera features allusions to Italian national identity and speaks specifically to the complex history of the sovereign state of Venice, which had fallen to Napoleonic troops after a millennium of independence. Verdi’s work resonated far more immediately and tragically in terms of Venice’s political fate and that of its famous Fenice opera house, at which “Attila” debuted.

Franca’s visit to the area also gave her the opportunity to grow her family archive which is a part of the WRHS Italian American Collection. She and other family members have donated a number of photographs and documents of the Barricelli family over the years. At this visit, Franca donated several interesting items, including Dr. Giovanni Barricelli’s prescription pad, architectural plans for the Cornell Road home, a poster announcing her father’s, Jean-Pierre’s, performance with the Cafarelli Opera Company in Cleveland, and his autobiography.

Spending time with and hearing Dr. Franca Barricelli’s presentation was a great honor and pleasure for me. She helped me directly connect to the past and learn more about a family so important to the formation and growth of the Italian community in Cleveland.

Tweet
More in this category: « Local Festivals Opera in the Italian Garden 2017 »