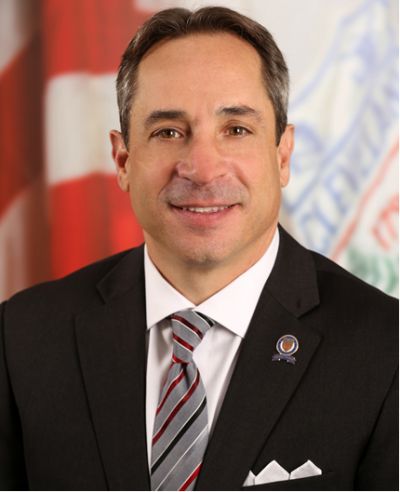 Cleveland Councilman Matt Zone was elected president of the National League of Cities (NLC) on the final day of NLC’s annual convention held in Pittsburgh this past November. Councilman Zone will lead the nation's largest and most representative membership and advocacy organization for city officials.

He joined NLC early in his career as a Cleveland councilman and steadily moved up the ranks of the organization, which advocates for more than 19,000 cities, villages and towns across the nation, offering resources, workshops and networking to municipal officials.

The only other Clevelander to hold the position of president of the National League of Cities was former U.S. Senator George Voinovich, who served as its president in 1985 while mayor of Cleveland.

Councilman Zone, who will serve as president of the 92-year-old organization for one year, told the convention that he is forming a task force on economic mobility and opportunity.

“This initiative will bring together mayors and council members throughout the nation to raise the visibility of local efforts to increase economic mobility, expand economic opportunity and reduce income inequality,” Councilman Zone said in his acceptance speech.

“We will build and support a new cadre of local government champions who, together, will be a strong, singular voice in national debates on economic mobility and opportunity," said Councilman Zone first elected in 2001 to the council seat both his parents once held.

“It is my hope that local leadership will move the nation closer to the day when federal policymakers and the wealthy will understand that shared prosperity only serves to strengthen America’s families and communities. The need for diversity and inclusion will be central to this conversation.” Councilman Zone asked Atlanta Mayor Kasim Reed to chair the task force.

Councilman Matt Zone grew up in the Detroit Shoreway neighborhood on Cleveland’s near west side.  Taking his seat was the fulfillment of a legacy started by his parents decades earlier. Matt’s father, Michael J. Zone, had represented the neighborhood on Council from 1960 until his death from a sudden heart attack in 1974. His mother, Mary, facing raising her seven children alone, reluctantly accepted multiple requests to finish his term; she ran for re-election and served until 1981.

In office, the second generation Zone set to work on a strategic plan to reinvigorate the neighborhood’s main thoroughfare, Detroit Avenue. Matt drew upon the diverse culture and his love of the arts as a catalyst to save the community.  Matt championed the development of the Gordon Square Arts District, which is comprised of new housing and businesses, retail development and the construction and renovation of three theaters.

Matt Zone is a proud Italian-American and learned at an early age the importance of family and his heritage. Matt’s parents are from the Campania region, each from two small towns, both near Caserta. Michael Zone’s family is from Calvi Risorta and Mary’s family is from the town of Regali.

Matt Zone is a life long member of Our Lady of Mount Carmel (West) and graduate of Cleveland State University’s College of Urban Affairs and St. Edward High School. He has been married to his wife Michelle for 26 years and they have a son who is a graduate of Kent State University, member of the Ohio National Guard and a Cleveland Police Officer.