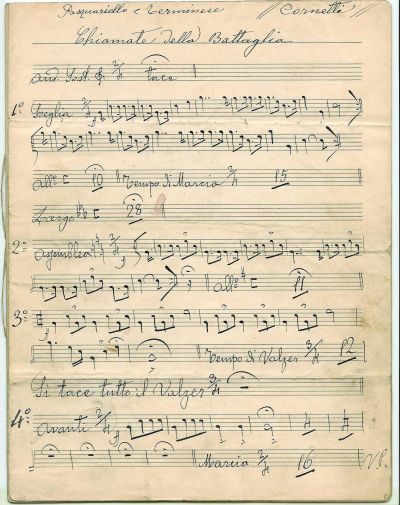 The Italian Banda, a band comprised mostly of brass instruments, can be traced back in Italy to the early 19th century. It has its roots in the military band tradition. The bande brought opera and classical music to those who could not afford to attend performances or those living in remote paese. They also supplied music for various Catholic rituals, like feast days, holy days and funerals. Band leaders often composed music specifically for these occasions.

The tradition of the Italian Banda was transplanted to America during the mass emigration from Italy, 1880-1920, and they could be heard playing in the newly settled Italian communities. Each Italian neighborhood in Cleveland, OH had at least two bands and they were very popular. The Verdi Italian Band was a band formed in Cleveland by Professor Pietro Oddo.

Pietro Oddo was born in 1843 in Alimena, Italy in the province of Palermo and began studying music at the age of 10. His musical talents blossomed during his service in the 59th Italian Infantry Regiment, a musical band regiment. Oddo was offered the position of regimental band leader, but declined when his term of service ended to pursue other interests.

Oddo immigrated to Cleveland in 1901 and settled in the area known as Big Italy on Ontario St. Besides founding the Verdi Italian Band, he also gave music lessons. In 1908, he moved into a new home in Little Italy at the corner of Murray Hill and Fairview Roads and quickly became friends with neighbor Salvatore Ciricillo, who was another band leader. Oddo resided in Little Italy until his death at age 73 in 1916.

The Verdi Italian Band often competed with the Russo Band, another Cleveland Italian band, for the title of best band. In 1904, this competition became quite heated when the Russo Band, led by Nick Gugliotta, refused to leave the stage during a concert and the Verdi Band started playing over them. The bands were physically stopped, but tempers between Oddo and Gugliotta continued to flare. Dr. Cerri, Consul of Italy, stepped in to help resolve the conflict as it was causing strife between fans living in the Italian communities. After three hours behind closed doors with the consul, the band leaders emerged as friends again.

Pietro Oddo was also a prolific composer of band music, such as waltzes, marches and potpourris. These pieces were used as standard pieces by musical organizations during the early 20th century throughout the U.S. and Italy. Many of his compositions were published by the Palermo Music House, Beninati.

In 2010, some of Oddo’s handwritten musical compositions dating to the 1900s found their way to the WRHS Italian America Collection. Ms. Janet Janecek, great-great-granddaughter of Pietro Oddo, inherited the pieces in the 1960s. She kept them for sentimental reasons, and ultimately decided to donate them to WRHS so they could be preserved for future generations and made accessible to the public. A piece called “Little Italy March” was adapted by members of the Italian Band of Cleveland and is now part of their repertoire.