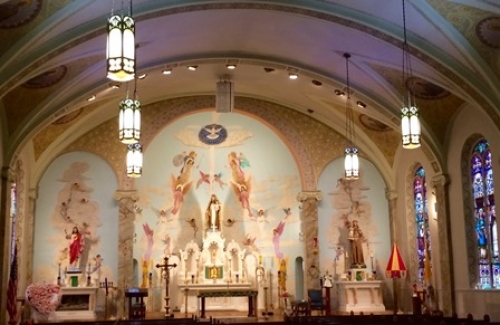 La Gazzetta (LG): Thank you for welcoming La Gazzetta to the Basilica of Our Lady of Mount Carmel. To begin, Monsignor, what is your history?

LG: How did the idea of becoming a basilica begin?

MC: Consideration began with Bishop Murry of the Diocese of Youngstown, who involved me as the pastor of the parish. After preliminary discussion, he suggested that we move quickly on a petition. There are many qualities that spoke in favor of the bishop's initiative. Our Lady of Mount Carmel has historically served Italian immigrants and their descendants. We conduct Perpetual Adoration of the Blessed Sacrament. The church building itself, added in 1976 to the U.S. Register of Historic Places, is an architectural wonder built in the Romanesque style that shows Italian Baroque and other features. The church boasts of antique, stained glass windows and a collection of statuary, inside and out, which are meticulously maintained.

LG: Can you describe the process?

MC: Through Bishop Murry, I submitted the basilica initiative to the President of the U.S. Conference of Catholic Bishops. In return, we received a manual in Latin with all the requisites for attaining from Rome the status of a minor basilica. In the Roman Catholic faith, there are just four major basilicas, all in Rome, and 1,691 minor basilicas worldwide. As a key part of the petition, Bishop Murry wrote, "Our Lady of Mount Carmel is a church of historical, cultural and artistic significance in the Diocese of Youngstown. For over a century, the parish has instructed men and women in the Catholic faith." Once we gained the nihil obstat, or seal of approval, from the U.S. Catholic Conference of Bishops, Pope Francis, through the Congregation for Divine Worship and the Discipline of the Sacraments, authorized our elevation to minor basilica.

LG: What privileges does a basilica enjoy?

MC: The designation places it in an elevated status of dignity and honor. We were named by Pope Francis and granted the privilege of creating a coat of arms that incorporates his own. Visitors may gain a plenary indulgence by visiting and praying in a basilica. We have the privilege of displaying the ombrellino and the tintinnabulum. The first is a symbolic umbrella that, in medieval times, would protect the head of a visiting pope. The second is a ceremonial bell rung to signal the arrival of the pope to the basilica, a processional item. We use it on solemn religious holidays.

LG: Now that the church is a basilica, what has been the effect on the congregation?

MC: It has had a very positive one. The legacy of this parish celebrates the history of immigration in Youngstown, at one time an industrial city that drew many ethnic groups to the city. Now that we're a basilica, it's brought honor and dignity to our immigrant heritage. In fact, we are the largest ethnic church in the city.

LG: And the effect on the larger community?

MC: One of the goals of a basilica is to evangelize and renew the Catholic Faith. The designation lifts up a local church and draws attention to its spiritual and artistic importance in the city of Youngstown.

LG: Were any renovations or additions required for the designation of basilica?

MC: We were already in the process of doing some outdoor beautification. It just so happened that we were in the midst of this work when we made our petition. It was a plus that helped speed the approval. We buried all the outdoor wiring and installed esthetic lighting to beautify our site. We have the new Mary Queen of Heaven statue on a bell tower outside. We envision the statue as a pilgrims' destination. She has the same 12 stars as the Blessed Mother outside St. Mary's Major in Rome.

LG: Youngstown has suffered a sharp decline in population in the past 40 years. Though much smaller in size, the city now seems poised to make a rebound. Do you see the Basilica fitting into the spirit of renewal taking place in Youngstown?

MC: Yes, there's a qualitative rebound. This is despite some serious problems that still remain in the city. I think the designation of basilica by Pope Francis underlines the continuity of a strong parish, a congregation with vital roots. For one thing, there are more employment opportunities now than in the recent past. There's always been an appreciation in Youngstown for its historical buildings. We've lost a few, but I feel that these days, people have awakened to our urban architectural heritage. I think it was a plus that previous pastors here saw the value of preserving the architectural integrity of the church structure and grounds. It's really a faith tradition that we're passing on. The church building reflects years of prayer and devotion. That should be honored. The outdoor shrines and landscaping add to Youngstown's beautification and renewal.

LG: Thank you for your time and for the tour of this beautiful church. Congratulations on the designation of minor basilica.

MC: Thank you very much.