Italians of the Greater Mahoning Valley 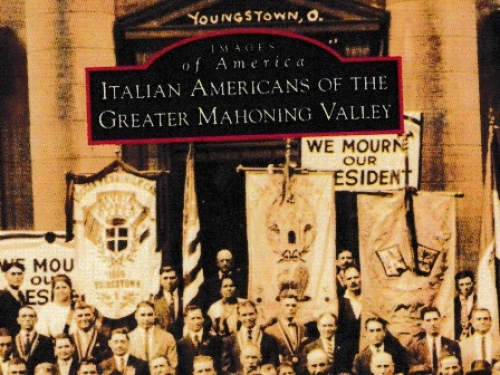 Italians of the Greater Mahoning Valley

The recently published "Italians of the Greater Mahoning Valley" made its appearance this holiday season under many local Christmas trees. The 127-page collection of historic photos and scholarly commentary sheds light on one of the most interesting communities of Italian heritage in the U.S. Drawn to the Valley by the boom in steel and related heavy industries, immigrants here developed a rich community life that continues to this day. The authors, Professors Donna DeBlasio and Martha Pallante, welcomed La Gazzetta Italiana to the Youngstown State University History Department to talk about their new publication.

La Gazzetta (LG): Thanks so much for accepting La Gazzetta's request to chat about your recently released book. How about a little background on your interest in the Valley's Italian immigration history?

Martha Pallante (MP): Personal affinity and scholarly interest motivated us to create the book. As part of our scholarly agenda, we do research on local populations. We have a personal attachment for working on issues of Italian immigration. You see, we're talking about a project that has been three to four years in the making. What makes this Italian American community of the Greater Mahoning Valley so unique? That's been a guiding question for us.

MP: Yes, the larger Warren-Youngstown Metropolitan Area is an anomaly. From what we can tell by looking at the larger scholarship on Italian immigration, it doesn't fit many of the patterns we see in NYC, Buffalo, Chicago, and Pittsburgh.

Donna DeBlasio (DDeB): What we read in the scholarly literature is that typically Italians didn't value education. We find that's not true for the Greater Mahoning Valley. Even in the first generation, children went to school in our area.

MP: We're talking about an era when an 8th grade education was considered significant and when only folks in the middle class sent their children to high school. But all you have to do is open any high school yearbook of those years in the Valley and it's loaded with students who have Italian surnames, male and female.

DDeB: You see, there wasn't a whole lot of work for children to do in Mahoning Valley's heavy industry, even in the pre-Great Depression period. There were no garment shops to speak of. By 1900, there was no mining. With very few exceptions, work here required strong manual labor. If the women worked, they ran boarding houses or sold goods and groceries out of their front rooms.

MP: The group that I've studied most thoroughly is that of immigrants who came here to work at the Niles Firebrick Company. We have good evidence that the company recruited workers in Italy to come to Niles. We located a document from the period between1910-1920 that shows the company discouraged the full-time employment of immigrant children.

DDeB: Take the mills, for another example. What work was a child going to do? Carrying water was about the only thing available. The few photos that we do have of children in the mills show water boys. There was no textile industry here to employ children. Kids could go to school, even poor kids, and many went all the way through high school. When they worked, it was as newsboys, before and after school. We have found several Youngstown-area first generation youth in college.

DDeB: Homeownership is another area that breaks the mold. Immigrants here moved fairly quickly to buy their own homes. This was not possible in New York and other large cities where apartment living was the only option.

DDeB: I think it's fascinating. I feel that many historians look just at the big cities when they study Italian immigration because those statistics are easier to find. There are very few scholarly papers that look at Italian immigration outside big metropolitan areas.

LG: Can we talk about the process of putting your book together?

DDeB: We knew the themes we wanted to cover. We started with our own collections and then put out calls to the community. We circulated flyers. We visited various Italian festivals. We communicated with Our Lady of Mt. Carmel Basilica. People responded to our calls. For use of family photos and documents, we offered respondents high resolution scans of their materials along with the return of their originals. We collected images for at least nine months. When we got down to the last bit, we found that we had "holes,'' things that were missing. For example, we didn't have many pictures of Italian Americans in service to their country, specifically in WWI and WWII. We had only one photo from WWI. Finally, we did receive a picture of the Trumbull County Sons of Italy in front of the McKinley Memorial; men and women, in 1918, in support of the 4th Liberty Bond Drive.

LG: Along the way, you must have met new people, developed new relationships.

DDeB: We got to know many new people. We met Edith D'Altorio Ritch and her husband, Carl. Their files were a tremendous help. Rosanne Pasquinelli Dando's contributions were wonderful. We met her at Martha's daughter's exhibit at the Youngstown Historic Center of Industry and Labor.

MP: The process of collecting the images and presenting the finished work at book signings has brought new people in. For Donna and me, the connection with the community has always been important. Often there's an artificial separation between academics and the local population â"town and gown" stuff. I think this project has done a lot to connect us even more closely to the community.

LG: Has this stronger tie to the community given you ideas for more investigations?

MP: Yes. Donna and I want to do a more scholarly project, a monograph, on the Valley's Italian American community. Although we think Italians of the Greater Mahoning Valley is wonderful and it tells an important story, there's so much more to research and share!

LG: Let's talk about the images. What dates do they cover? What kinds?

DDeB: Roughly 1890-1960. Our book has images of documents and images of people, formal and candid. Those candid shots were hard to come by. They were the ones we wanted most. We received dozens of wedding portraits, several of which we published. They're beautiful and from different periods. But we also wanted un-posed pictures: the receptions, the cookie tables, and the church ceremonies. Luckily, cookie tables show up in the photos of the cake cutting, though it wasn't the intention of the photographers to include them.

MP: It's only been two weeks since the book's release. We have four book signings so far and more are planned.

LG: Lastly, what are your favorite photos in the book?

DDeD: I really like all of the Idora Park photos. Then there's the cover photo. It's August of 1923 and President Warren G. Harding has just died in office. There's a lot of anti-immigrant prejudice and the U.S. Congress is placing strict quotas on immigration from Southern Europe. At its convention, the Ohio Chapter of the Sons of Italy displays banners with the words "We Mourn Our President." The "our" is so important because it shows an Italian American community identifying itself as consciously American.

MP: On a personal level, I love my grandmother's passport photo, so full of information. Then we have the July 12, 1924 front page of the local Italian paper, Il Cittadino ItaloAmericano. There's an article against the Ku Klux Klan. Basically, it says that any organization that discriminates against people because of their religion, political beliefs, or skin color is anti-American. It goes on to say that Italians need to embrace their American rights and exercise them. Italians need to vote.

LG: This has been great. Thank you so much for your time. Please keep us informed about your research into our local community.

"Italians of the Greater Mahoning Valley" can be purchased for $21.99 plus tax, from the YSU College of Liberal Arts and Social Sciences, One University Plaza, Youngstown, OH 44555. All proceeds benefit the YHCIL, popularly known as "The Steel Museum."