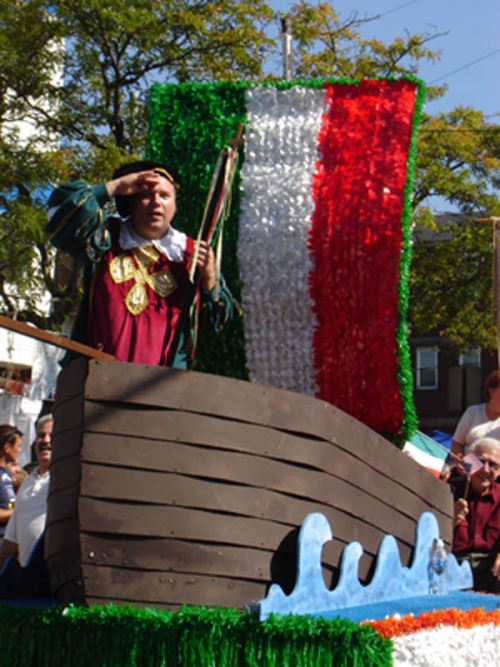 In the beginning, Columbus Day was celebrated in the neighborhoods by pockets of the Italian American community of Greater Cleveland. In 1951, the Italian consul, Count Gabrio Siegray, brought Italians together at St. Marian's Rectory to discuss a unified event. Included in the meeting were the late Hon. Frank Celebrezze, Sam Panzarella, Carl Ferrara, Louie DePaolo and Rev. Francis Cacciacarro. They agreed on a citywide Columbus Day celebration and a meeting of elected officials at the Hotel Statler. The first chairman was Frank Catliota of the Alta House. Marie Manfredi was the first recording secretary (and is a 2010 parade co-marshal, Marie Calandra). Other early chairmen included Nick Focarett, Sam Ferrazza, Gene Zannoni and Salvatore Calandra (2010 parade co-marshal).

The first two downtown parades were evening events. Daytime celebrations followed and became the norm. Each parade was preceded with a Mass at St. John's Cathedral and later briefly rotated to St. Marians, St. Rocco's and of present years, Holy Rosary in Little Italy. In 1958 the parade was cancelled out of respect for the memory of beloved Pope Pius XII.

A high point in parade history happened in October 1964 when 20,000 people lined Euclid and Superior Avenues as more than 1,000 marched to Public Square. Of keen interest that year were the floats -- all of which were adjudged the best by Mayor Ralph Locher, Chairman Vince Mancuso and Assistant Law Director Lou Corsi.

The fall of 1992 was critical time for the survival of the Cleveland Columbus Day holiday. Councilman Jay Westbrook introduced a resolution to abolish the Columbus Day holiday and rename it as "Indigeious People Day." Basil Russo, ISDA Vice President, rallied Italians from all quarters; the ISDA filled six buses and 600 Italians jammed city council chambers. City lawmakers were astonished at the turnout. Council permitted Russo to address the issue of a name change and explained how important Christopher Columbus was to America and Italians. Following a standing ovation, Councilman Westbrook withdrew his resolution and other lawmakers followed, commending Columbus and Italians for their contributions to the nation.

In the following years, the downtown parade numbers dwindled and the Federation of Italian American Societies sponsor was unable to continue to underwrite the costs. Basil Russo and ISDA officers stepped in and assumed sponsorship. In 2003 and the parade was relocated to Little Italy, a neighborhood more symbolic of the Italian heritage and culture. Russo shared ensuing plans with the Northern Ohio Italian American Foundation (NOIA) and its chairman, Umberto Fedeli, and they agreed to join in as a co-sponsor.

Of late, thousands have lined Murray Hill and Mayfield Roads to cheer on the high school bands, floats, vehicles and parade marchers as they proudly traverse the neighborhood. Each and every year Columbus Day is a a day of celebration for Italians and Italophiles alike, and the Cleveland Columbus Day Parade is just the place to share in our Italian pride and heritage!