In the Cucina with La Gazzetta: What I Learned as a PBS Zoom Chef 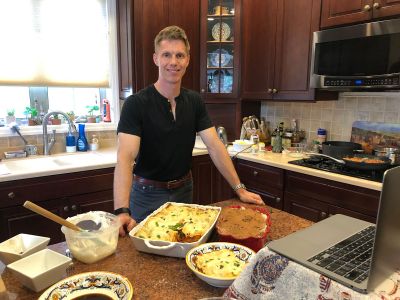 “If you loved me, you’d eat it” was my Italian grandmother’s mantra. Growing up, I recall this barely five-foot-tall woman a powerhouse who expressed her love through homemade pizza, sauteed zucchini flowers, and every dessert imaginable. While preparing for my first guest chef appearance, I realized her food gene was passed on to me.

My background led to an opening to be a guest chef on “World Kitchen,” a PBS affiliate, WPSU, Zoom cooking show. Accordions, fierce bocce matches, and no fewer than eight pasta dishes defined holidays in my Italian American family. Inspired by my heritage, I spent some years in Italy. Captivated, I observed my aunts form gnocchi and tagliatelle by hand. I immersed myself in cookbooks and raced home by bicycle to watch favorite TV chefs. Nothing beat meandering cobblestone streets, soaking up all I could from the locals. I savored delicacies – like a crisp Neapolitan sfogliatella dusted with powdered sugar or gooey taleggio cheese on crunchy bread.

I imagined appearing on “World Kitchen” would be like hand cranking out yolk-colored pasta sheets to an applauding audience. Soon I discovered, more than merely cooking a meal, it is akin to preparing for both a theatrical production and teaching a class – and it was marathon training. Wanting simple but not overly pedestrian recipes, I opted for Lasagne alla Bolognese, with a nutmeg-infused bechamel sauce and a brandy-tinged Tiramisu.

Against a deadline, I made the meal, jotting down the procedure, ingredient quantities, and timings. It took 90 minutes – a reach even for a Zoom show. Though I often made these for guests, I kept referring to notes and my techniques were sloppy. Looking over the pictures for the promo, I cringed. Had my preschool-aged son been the sous chef? Worse, waiting 30 minutes for a sauce to simmer would put viewers to sleep. And what would I say about San Marzano tomatoes or Parmigiano Reggiano cheese?

Avowed to halve the time, I refined my techniques, scrutinized cookbooks, and studied chefs on YouTube. As I practiced again and again, the fragrances wafting out of my kitchen were reminiscent of a trattoria. While I created the dishes, the medieval monks behind the origins of Italian cheeses and other tales would color my explanations. I channeled my cultural background and the anecdotes flowed: the time Aunt Amelia cooked dog food (which I unwittingly ate), my grandfather’s youth as a shepherd in Abruzzo, and hours spent with family at the kitchen table. I scripted out the episode, repeating the points while driving, on daily runs, and recorded cooking sessions on my iPhone.

The morning before the show found me behind my stove methodically mixing several batches of bechamel and two ragù sauces – oh, and chicken. My parents offered to babysit my five-year-old during the recording, and they would need to eat. Like clockwork, I assembled a lasagne I had baked ahead and would unveil as the finished product. The pre-made sauces were destined to be choreographed cooking stages during the broadcast.

I cleared my kitchen table and laid it all out – every possible ingredient, pan and instrument used for practice, components made in advance, and the serving dishes bought for my debut. After four trips to load my jeep, I could make a Tiramisu just from the overflow piled up in my son’s car seat. Darting back into the house, I grabbed extra clothes and an apron. I had make a meringue on set ahead of the show. “What if it splattered on my shirt?”

Arriving early on site, I spent a frantic hour setting up and on several dry runs. I walked in front of the camera. “Buongiorno,” awkwardly came out of my mouth. Then, as if by divine intervention, the scraps of information and countless practice sessions came together seamlessly. “A tavola non si invecchia mai,” I said, wrapping it up with an Italian proverb. It means “At the table one doesn’t age.” To me, it is a reminder that family and lovingly prepared food is a treasure.

Before my experience as a guest chef, I would passively watch cooking shows and think, “That’s easy.” But even for a skilled chef, it requires enormous groundwork to be technically sound and appear effortless. In the end, I discovered entertainment cooking is a vehicle to share our stories. Sure, viewers may want to learn some compelling recipes. But a true chef’s power transcends our stomachs, capturing our minds and, as my grandmother did, our hearts. Buon appetito!

To view recipes and a recording of Patrick’s episode visit https://wpsu.psu.edu/digital/worldkitchen/classic-italian/.