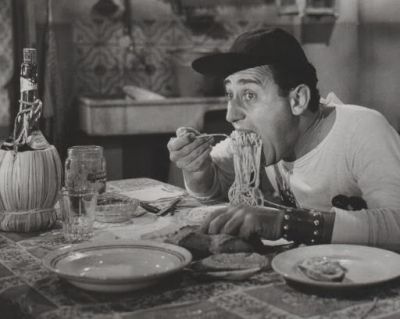 Cucina Povera, poor or peasant cooking, means utilizing what produce and food stuffs are available where one lives along with whatever is in the kitchen.

When my nonno Nicola Lucarino came to America from Italy on the SS Conte Grande in 1931, his “calling or occupation” on the Manifest of Alien Passengers was “peasant.” Even though I grew up in America, Cucina Povera was and still is a part of my heritage and lifestyle.

My parents grew up in Molise, in an inland valley, where cows and fish were not plentiful, but goats and sheep, beans, peas, and greens were readily available, so, understandably, that is what they ate. My mother’s childhood memory is that during WWII, Mussolini provided the citizens of her village with peas, and pasta e piselli was a frequent dish that my mother made for us and one I grew to love.

My mother grew up in town whereas my father grew up in the outskirts of the same town where his family had land that they farmed and share-cropped; bartering was commonplace. My nonno DiMario, a tailor, would make new clothing or repair old clothing in exchange for beans and vegetables from the Lucarino farm and other village farmers.

The “kitchen of the poor” came from a combination of the devastation of two world wars and the generally depressed conditions of southern Italy where the soil was harder to work and food choices were limited. Especially in southern Italy, but found everywhere in Italy, Cucina Povera is based on the principle of not wasting anything, using what you have in the best way possible – made healthy, organic and tasty. I will never forget years ago when my mother was visiting me and saw that the lettuce in my garden had bolted, meaning that it had shot up and was producing its seeds. The lettuce gets bitter when this happens, but she harvested what was remaining, sautéed it in olive oil with a little garlic, salt and pepper and created a tasty side dish. Her ingenious creativity in utilizing what others would have thrown away, with a reverence for everything that “God gives us,” is the essence of Cucina Povera.

Pamela Sheldon John, in her book, "Cucina Povera," relates stories of those who not only survived but thrived through harder times. One person, Franca Magi, the owner and cook at Trattoria Tripolitania in Sarteano, Tuscany (who has since retired) said, “We had less, but we were better off; the food was poco, ma buono, simple and full of flavor. We appreciated what we had more because it was harder to come by.” For more information about the historic Trattoria Tripolitania and its cucina povera offerings, check their Facebook page.

My grandmothers baked fresh bread almost daily so we always had a good supply, and once in a while, the bread would go stale. This was not a problem for my mother and many older Italians who adopted the cucina povera lifestyle. My mom would break off a chunk of bread, run a little water over it to hydrate it, pour on a little olive oil, and with a sprinkling of salt, my sisters and I would have a snack. Recently, when visiting my friend, Enzo, in Puglia, his mother made us an amazing dish called Frizelle Salentine, hard bread doused with water and olive oil, served with cut up vine-ripened tomatoes and herbs.

Gianna Greco offers a Cucina Povera cooking experience in Lecce, which includes shopping at a local market, a “Leccese caffé” stop, a hands-on cooking class and ends with a meal of the prepared dishes with a fine Salento wine. cookingexperience.it.

The typical Italian biscotti are the twice-baked iconic cookies that we love to dip in our coffee or wine. They were not twice-baked for the crunch, but because they would last longer. Prosciutto was first seasoned and cured so that it lasted through the winter. What was once created out of necessity has now become food that many have grown to love.

Most of the restaurants that I listed in my series, a Vegan Tour of Italy, have adopted the principles of la Cucina Povera. I have not had the pleasure of dining at most of them, but I am looking forward to next year with my son, David, who has been un vegano for over 20 years and works in the vegan food industry. When my children and I got our Italian citizenships a few years back I promised to take him to Italy…for vegan food in Italia! Perhaps I should start dieting now to get ready!

Next time we will explore the history of food waste and tips on ways we can do our part to end it, cut out excess and live the simple Cucina Povera lifestyle, just like the Italians!

View the embedded image gallery online at:
https://www.lagazzettaitaliana.com/lifestyle/9710-the-healthy-italian-la-cucina-povera#sigProId732c0dd52e
Tweet
More in this category: « The Healthy Italian: A Vegan Food Tour Of Italy The Healthy Italian: Excess and Wastefulness »