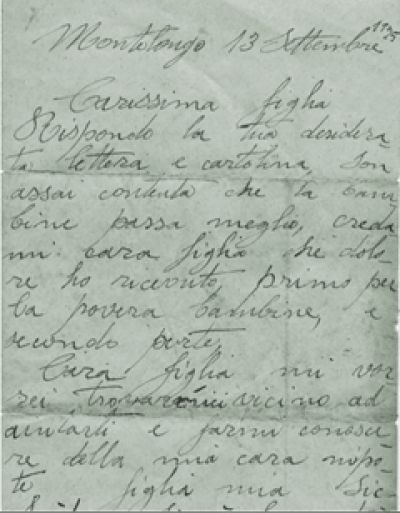 Many immigrants were in regular contact with their families back home. Those who were illiterate had people who wrote for them. Correspondence from Italy was often read aloud to the entire family. Letters could contain money or a reference to a remittance that was on its way.

In this new column, Ben Lariccia shares letters from Youngstown State University’s “Steel Valley Voices: Italian Collection,” of which he is the creator of. The digital archive makes letters, documents, photographs, and other materials that reflect the history of the Italian American culture available to the public.

We hope you enjoy this new column!

This month’s letter is from Montelongo, Campobasso to my family in Youngstown, OH. Some boys were playing with fire. It spread to little Antonietta’s dress. Her anguished grandmother, Antonia, writes to Antonietta’s mother, Lucia, about the child who has been hospitalized.

In answer to your letter that I wanted so much to get and to your postcard, I am very happy that your little girl is doing better. Believe me, dear daughter, how much pain I have felt first for this poor little girl, and second for you.

Dear daughter, I would like to be next to you in order to help you and therefore be known to my dear granddaughter. Has she complained that everyone has gone to see her and not me? Ah, if I could fly and not be missing there. Damned distance! Poor daughter, she got burned almost all over. Blessed be that beautiful Saint Anthony who granted you that grace (that she has survived) – who may console you all the time.

The money – I’ll do as you tell me to give 50 soldi to a person. I’ve also had a mass said to St. Anthony. Dear daughter I’d like to know how much effort it is for you and Gioso. Is the hospital far away? I’d like to know if they know whether her burns will cripple her in the thigh or in the arm. You can’t believe, my daughter, all the thoughts I have. I grieve for all the pains that the poor girl is suffering.

May God impart proper justice if that boy did it on purpose. Dear daughter, it's been a year since Gennaro Paoletti's son was burned and he hasn't healed yet because they left his arm stuck to his side. I tell you this so that you'll be careful; otherwise, I wouldn't have told you, so as not to scare you. In any case, it doesn’t matter if it takes some time for the burns to heal well.

Lots of dear kisses to the dear baby Antoinette. Kisses to the other kids. Many hellos to Filomena, Gioso and everyone. Many kisses from your sisters.