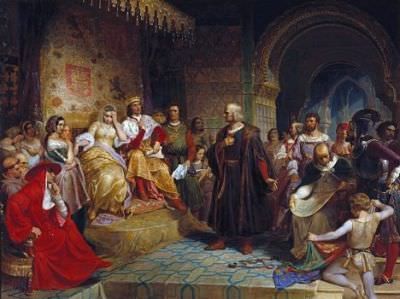 “The Columbus Letters” were published in a four-part series in La Gazzetta Italiana in 2019 and can be found on www.lagazzettaitaliana.com. Search “Columbus Letters.”

On his return to Spain, sailing in January and February 528 years ago, Christopher Columbus composed three letters describing his first voyage west and his experiences on the islands he explored. The letters were addressed to Queen Isabella and King Ferdinand; Luis De Sant Angel (Santangel), who helped finance the voyage; and Gabriel Sanchez, treasurer of the Monarchs.

Columbus had an unusual writing style, using mostly Spanish but blending in Portuguese. Currently, 17 editions of the original letters have been documented: translated – from Spanish to Latin and other languages – copied by hand and printed. Sources state that no original letters written by Columbus have yet to be found.

The letters to Luis De Sant Angel and Gabriel Sanchez are similar in length and content; the letter to the Monarchs – discovered in 1985 in a book containing copies of letters written by Columbus to the Monarchs from 1493 to 1495 – is longer. It includes compliments to the Monarchs, references to God and Christianity and the prospect of prosperity on the islands.

While the translated versions of the letters are similar in content, the wording differs, leading to interpretations based on which version is read. Still, according to documentation available, much in the letters appears to provide a fairly accurate rendition of Columbus’s historic voyage. What is available, though, has also been the basis for critiques on his character, work and legacy.

Probably the most tarnishing to his character is “I took by force some Indians” (from the Sanchez letter; the Sant Angel letter has “natives” in place of “Indians”). Those against Columbus use this phrase as a foundation of their protests, blaming Columbus for the mistreatment of the natives and all subsequent horrific exploitation.

The full phrase from the Sanchez letter: “As soon as I had come into this sea, I took by force some Indians from the first island, in order that they might learn from us, and at the same time tell us what they knew about affairs in these regions. This succeeded admirably; for in a short time we understood them and they us both by gesture and signs and words; and they were of great service to us.”

From the Sant Angel letter: “I took by force some of the natives, that from them we might gain some information of what there was in these parts; and so it was that we immediately understood each other, either by words or signs.”

From the Monarchs letter: “By this time I already understood something of the language and signs made by some Indians I had taken on the island of San Salvador, and I understood that this was still an island.” In the same paragraph, after mentioning another island, “I left and took some Indians from that harbour so that I could find out from them something about those lands.” In further describing his experiences, “… because I very much wanted good information about everything; and the solution I came up with were the Indians I had with me, who were learning our language and we theirs, and we shall see later, on the next voyage …”

In both the Sanchez and Sant Angel letters, mention is made of bringing some of the natives back to Spain to testify to what is in the letter. However, the letters do make references to slaves, who were – in the late 15th century – not only part of the culture of Europe, but also the rest of the world.

In assertions against Columbus, much of the vilification is the mocking disparagement of his “discovery” of a “new land.” GPS was not available in 1492 and although others had bumped into this new continent before Columbus arrived, it was uncharted territory. Subsequent comments constantly imply that all that occurred during the following years was carried out only by Columbus.

In the late 15th century, Spain and Portugal were the leading maritime powers in Europe and in competition to be the most powerful. A trade route to the east, more land, more Christians, and more gold would bring more wealth to those in command. The Monarchs in Spain had to increase their empire and although they had previously denied supporting him, in 1492 they turned to Columbus.

In each of the three versions of the letters below, the opening paragraph shows that the land Columbus explored was explicitly for the Monarchs of Spain (for expansion of their empire). While the land was inhabited and regions had been previously explored, it was a recorded discovery for Spain, and – through the distribution of the Columbus letters – acknowledged throughout Europe as a discovery.

From the Sanchez letter (Source: https://www.gilderlehrman.org/sites/default/files/inline-pdfs/t-01427.pdf): On the thirty-third day after leaving Cadiz I came into the Indian Sea, where I discovered many islands inhabited by numerous people. I took possession of all of them for our most fortunate King by making public proclamation and unfurling his standard, no one making any resistance.

From the Sant Angel letter (Source: http://www.ushistory.org/documents/columbus.htm): … I write this to tell you how in thirty-three days I sailed to the Indies with the fleet that the illustrious King and Queen, our Sovereigns, gave me, where I discovered a great many islands, inhabited by numberless people; and of all I have taken possession for their Highnesses by proclamation and display of the Royal Standard without opposition.

From the Monarchs letter (Source: http://www.ems.kcl.ac.uk/content/etext/e024.html):  I have come with the fleet that Your Highnesses gave me from the Indies, to which I crossed in thirty-three days … I found people without number and very many islands, of which I took possession in Your Highnesses' name by royal proclamation and by unfurling the royal standard, and without contradiction. (Definition of royal standard: “an emblem of royal authority that is usually a flag or square banner smaller than the national flag.” Source: merriam-webster.com)

History is not isolated. It is important to know how it relates to past events and to understand the circumstances surrounding those events.

For lesson plans about the Columbus Letters, go to http://italamerheritage.com/lesson_plans.htm.