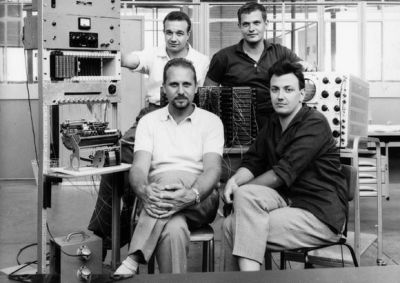 Ballet was invented and performed for the first time in Florence in the Italian Renaissance courts during the 15th and 16th centuries. Catherine de’ Medici, an Italian aristocrat who later became the Queen of France, brought ballet to France where it developed even further.

The first dentures were developed by the Etruscans in northern Italy in 700 B.C. They were originally made of human or animal teeth.

The watermark, an identifying image or pattern in paper that appears as various shades of lightness/darkness when viewed by transmitted light, was first introduced in Fabriano, Italy in 1282. The town was also one of the earliest places in Europe to make high-quality paper on an industrial scale – starting in the 13th century.

The origins of modern banking can be traced to medieval and early Renaissance Italy. The earliest known state deposit bank, Banco di San Giorgio, was founded in 1407 in Genoa.

The world’s first botanical garden was founded in Pisa in 1543.

The Programma 101, which some consider the first Desktop computer, was designed by a small team led by Pier Giorgio Perotto, an Italian electrical engineer and inventor working for Olivetti, between 1962 and 1964 and launched in 1965.

Jean fabric originated in the cities if Genoa, Italy and Nimes, France. In fact, the French word for Genoa is Genes, which may be the origin of the word jeans. By the 17th century, jean was a crucial textile for working-class people in northern Italy.

The “Moon Boot,” a notable fashion trend throughout the 1980s, is a snow boot brand founded by Giancarlo Zanatta of Giavera del Montello, Italy.

Tweet
More in this category: « Back to School in Italy See Art for Free in Italy: Visit the Cemetery! »