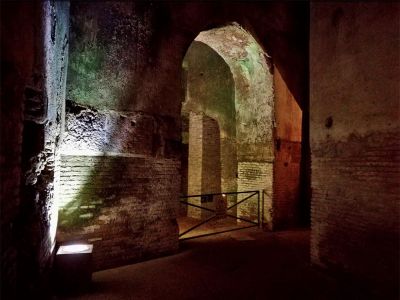 The Domus Aurea (Golden House) has one of the most historically exciting stories in Rome, starting with the decadent excesses of Emperor Nero and later becoming a source of inspiration for Renaissance artists such as Raphael. To most, Nero was the licentious, cruel Emperor famous for his self indulgence and the man who watched from a tower while singing a song about the razing of Troy as flames engulfed Rome. The story may be apocryphal, though it’s argued that Nero himself ordered the burning of Rome using the Christians as scapegoats and thus setting in chain centuries of persecution. He became emperor when his mother, Agrippina, poisoned his step-father, Claudius, and Nero, in turn, murdered his mother. He was the fifth and last emperor of the Julio-Claudia dynasty that began in 27 B.C. with Emperor Augustus and continued with the Tiberius, Caligula, Claudius, and Nero himself.

Less known to most is, perhaps, his opulent villa, a vast landscaped palace commissioned in the heart of ancient Rome after the great fire in 64 A.D. had destroyed a large part of the city and the aristocratic villas on the Palatine Hill. The structure was designed as a pure place of entertainment, as shown by the presence of 300 rooms without any sleeping quarter, kitchen or latrines, while  Nero’s own palace remained on the Quirinal Hill. The Domus Aurea complex covered parts of the slopes of the Palatine, Esquiline, Oppian, and Caelian hills, with a man-made lake in the marshy valley. While the estimated size of the Colossus Neronis is an approximation, as much has yet to be excavated, it is believed that it occupies no less than 1/4 of the area of the ancient city of Rome!

Rooms sheathed in dazzling polished white marble were given richly varied floor plans, shaped with niches that concentrated or dispersed the daylight. There were pools in the floors and fountains splashing in the corridors. Nero took great interest in every detail of the project, according to Tacitus’ “Annals“ and oversaw the engineer-architects, Celer and Severus, who were also responsible for the attempted navigable canal. Some of the extravagances of the Domus Aurea had repercussions for the future. The architects designed two of the principal dining rooms to flank an octagonal court, surmounted by a dome with a giant central oculus to let in light. One innovation was destined to have an enormous influence on the art of the future: Nero placed mosaics, previously restricted to floors, in the vaulted ceilings. Only fragments have survived, but that technique was to be copied extensively, eventually ending up as a fundamental feature of Christian art, namely the apse mosaics that decorate so many churches in Rome, Ravenna, Sicily, and Constantinople.

Celer and Severus also created an ingenious mechanism, cranked by slaves, that made the ceiling underneath the dome revolve like the heavens, while perfume was sprayed and rose petals were dropped on the assembled diners. The extensive gold leaf that gave the villa its name was not the only extravagant element of its decor: stuccoed ceilings were faced with semi-precious stones and ivory veneers, while the walls were frescoed, coordinating the decoration into different themes in each major group of rooms. Frescoes, believed to be the work of artist Famulus (or Fabulus according to some sources) and his assistants, covered every surface that was not more richly finished. Fresco tecnnique, working on damp plaster, demands a speedy and sure touch. Pliny, in his “Natural History,“ recounts how Famulus went for only a few hours each day to the Golden House, to work while the light was right. The swiftness of Famulus’s execution gives a wonderful unity and astonishing delicacy to his compositions.

After Nero’s death, the over-the-top extravagance and opulence of the Golden House was a severe embarrassment to his successors. It was stripped of its marble, its jewels and its ivory within a decade. Soon after Nero’s death, the palace and grounds were filled with earth and built over: the Baths of Titus were already being built on part of the site in 79 A.D. On the site of the lake, in the middle of the palace grounds, Vespasian built the Flavian Amphitheatre (later known as the Colosseum), which could be reflooded at will, with the Colossus Neronis beside it. The Baths of Trajan and the Temple of Venus and Rome were also built on the site. Within 40 years, the Golden House was completely obliterated, buried beneath the new constructions, but paradoxically this ensured the wallpaintings’ survival by protecting them from dampness.

Today, after many years of painstaking archeological restoration, parts of the Domus Aurea are now open to the public for guided tours and it is already one of the not-to-be-missed sites of Rome. While it would be a breathtaking experience in itself, a visit to Nero’s underground palace is made even more memorable by the latest available technology through enhanced reality. With the aid of 3D glasses for augmented reality, combined with a detailed reconstruction created by amazing graphic designers, visitors will descend into the rooms and corridors of Nero’s palace to have a 360-degree experience of the Golden House. The controlled atmosphere inside means that the temperature is always around 50 F with 100 percent humidity. Visitors are strongly advised to take a coat, jacket or pullover with you at any time of the year.

Tweet
More in this category: « The Power of Venice Elegance Achieved: The Italian Rapier »