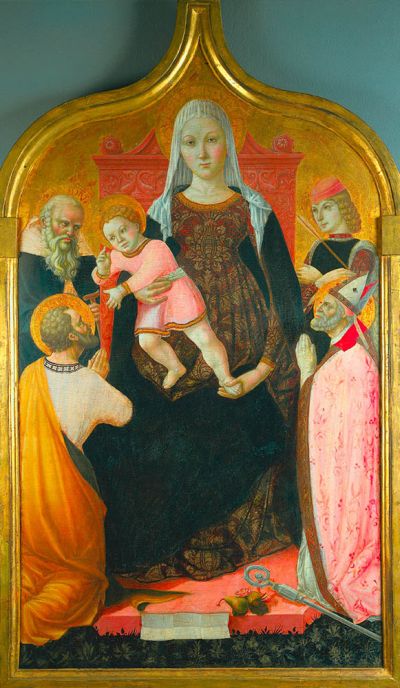 Textiles were an important and expensive commodity in most affluent homes in Renaissance Italy. An inventory made in 1600 of the Florentine noblewoman, Camilla Magalotti, following the death of her husband, reveals no less than 929 braccia (1,771 feet) of various kinds of fabric stored within her house. Some of these were destined to be made into garments. Linens, for example, could be used for shirts or bedding. Other more sumptuous fabrics were intended for hangings, curtains and various furnishings such as a baldachin over a bed. Surviving evidence, such as inventories, can give us only a partial picture of the great variety of textiles used to decorate the home and clothe its occupants.

As the textile industry in Italian cities and towns developed over the course of the 1400s and 1500s, the basic raw materials—cotton, linen, wool and silk—were woven in ever more imaginative combinations to create a range of new products.  Many of the sumptuous textiles of this period relied on the patronage of wealthy consumers, some of whom funded their own textile workshops to assure the quality and uniqueness of what they wore. The church also served as a major patron of the textile arts, commissioning elegant and dramatic liturgical fabrics to give substance and beauty to religious rites. These included textiles such as flat and cut velvets, tapestries, embroideries, and laces that reflect the important modes of textile production from the 1400s up to the 1700s. Given the high status and cost of these textiles, it was both secular and religious patronage that helped the textile industry to flourish in this period.

Though many examples of these deluxe textiles have survived from the Renaissance in Italy, we can learn much from observing depictions of the fabrics used in garments and home furnishings in the paintings of this era. In the Renaissance galleries of the Cleveland Museum of Art, for example, will be found a beautiful panel painting by Lorenzo da Sanseverino. It shows the Madonna with the infant Christ surrounded by four saints. The Madonna is seated upon a throne. To the left, we find Saints Anthony Abbot and Mark. On the right are Saints Sebastian and Severino. The painting dates to about 1490-96. It is said to have been commissioned for a church in the town of San Severino in Marche. Little is known about the artist himself, though he lived from 1468 to 1500. The finest textiles and dress associated with Italian aristocracy were often represented in religious paintings. Here, the Madonna wears her traditional blue mantle and veil, which is pulled to the side to reveal a fashionably tailored dress with close-fitting sleeves made of luxurious velvet. She is presented to the viewer much like a well-to-do lady of the Renaissance. Her dress is embellished with gold thread, which forms the pomegranate pattern on the deep crimson velvet ground. Saint Sebastian, on the right, wears an equally opulent velvet doublet under his sleeveless tunic, and below him, Saint Severino, presented as a bishop with miter and crozier, wears a sumptuous embroidered cope. Velvets, of the type seen here, were woven on special looms using silk fibers.

Central and Northern Italy were arguably among the richest regions in Europe during the Renaissance. A sizable part of their wealth came from manufacturing and silk was one of the most important industries in Italy. Silk was initially imported from the Ottoman Empire, but by the late 1400s, silk weaving had been established in several Italian cities. These were principally Florence, Lucca and Venice. Due to its expense, silk was used more frequently for dress fashions than domestic furnishings, but in wealthy households it was employed to make bed hangings such as curtains, valences, covers, and cushions. A further indication of their value is the fact that most silk hangings in aristocratic homes were crimson in color. The dye for this color was obtained from the kermes beetle and was one of the costliest. Another popular color was yellow which presumably gave the impression of an interior suffused with gold. To enhance the prestige of silk furnishings, they were often embellished with metal threads for embroidery or fringes.

In ecclesiastical settings, velvet embroideries with silk and metal threads were used for the prelates’ vestments, particularly in larger, wealthy religious foundations. Such luxury textiles could also have been seen in the form of hangings and altar cloths in church interiors which, along with gold chalices, reliquaries and illuminated books, contributed towards an ethereal and other-worldly experience for the beholder. Medieval and Renaissance textiles do survive today. In order to preserve them for posterity and to protect their fragile colors from fading, museums display them only for short periods and in low light conditions. However, by noting the fabrics painted by artists in portraits and religious paintings, the modern viewer can attain a sense of the richness and diversity of Italy’s sumptuous textiles from the Renaissance.

Our painting of the “Madonna and Child with Saints” by Lorenzo da Sanseverino provides such an impression. We do not know who commissioned this beautiful painting, but the detail lavished on the sumptuous garments was clearly intended to add stature and to impress. It was a way of honoring the Madonna and the saints who surround her. Both the artist and the patron understood the visual message conveyed by luxury textiles.

Tweet
More in this category: « Italy's Republic Day The Power and Strength of Italy »