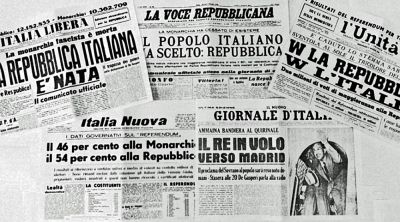 As summer draws near, it is important to acknowledge and honor the annual summer traditions and holidays that come with the season. Italy’s Republic Day, known in Italian as La Festa della Repubblica, is the national celebration that bears similarities to Independence Day in other countries, such as the July 4th celebration in the U.S.

This solemn, annual celebration on June 2nd, commemorates the day the institutional referendum was held by universal suffrage in 1946. The Italian people, called to the polls to decide on the form of government following WWII and the fall of Fascism, chose the Republic, thus ending the monarchy after 85 years of ruling by the House of Savoy, and sending its male descendants into exile.

The old monarchy was supportive of Benito Mussolini’s rule and, with the new Republic, a new rule could finally take place to benefit the Italian people.

In observance of the nationwide celebration, offices, banks, shops, museums, and schools remain close, while most people have a day off of work. Although the main parade takes place in Rome, the Country’s capital, many other Italian cities celebrate the day as well. Fireworks often follow these events, as well. A fascinating aspect of this holiday is displayed in Rome. There, a grand military parade is held in the morning along Via dei Fori Imperiali, a street along the Roman Forum, presided over by the President of the Italian Republic in his role as Supreme Commander of the Armed Forces. High officers of State also attend. Large crowds gather with larger-than-life flags and music to share in the joyous occasion. Part of the morning event’s provides for the ceremonial laying of a wreath on the Altare della Patria (the Tomb of the Unknown Soldier) at the Vittoriano, before the President of Italy reviews the parading formations. This monument, the largest national monuments, was built in honor of Victor Emmanuel, the first king of a unified Italy. The  structure was inaugurated in 1911 and completed in 1925. The parade ends with a flyby of the Frecce Tricolori aerobactic team in the colors of the Flag of Italy. Around the world, June 2nd celebrations are held or organized in all the Italian embassies and Consular offices.