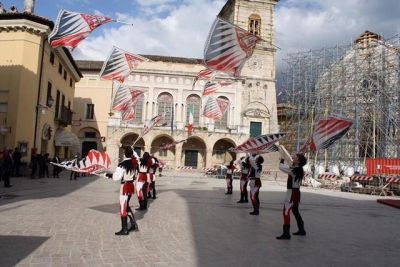 Only the facade of the Basilica dedicated to St. Benedict still stands in Norcia following the earthquake of October 30, 2016: a sobering backdrop to the celebration of his feast day this year.

Declared “Patron Saint of Europe” by Pope Paul VI in 1964, San Benedetto, founder of western monasticism and born in Norcia at the end of the fifth century, is feted in his birthplace with fanfare every March 21st.

Locals in medieval dress parade solemnly through medieval alleyways and the Saint’s venerated relics are born in solemn procession, flanked by the Benedictine friars. This year, too, despite a melancholic backdrop of earthquake-damaged buildings lined with scaffolding, the procession took place.

Our town of Assisi joined in the Norcia festivities in solidarity this year: our drummers in medieval dress beat out a festive drum roll in front of the statue of St. Benedict encircled with flags of the European countries. Assisi’s sbandieratori (medieval banner wavers) flung their banners high to the sky in front of the facade of the Basilica di San Benedetto which now seems enclosed in a wire cage.

Two cities coming together to carry on traditions even after the devastation the earthquake caused. The true sense of resilience.

Tweet
More in this category: « Honoring Padres and St. Joseph: What it Means to Celebrate Father's Day Italy's Republic Day »