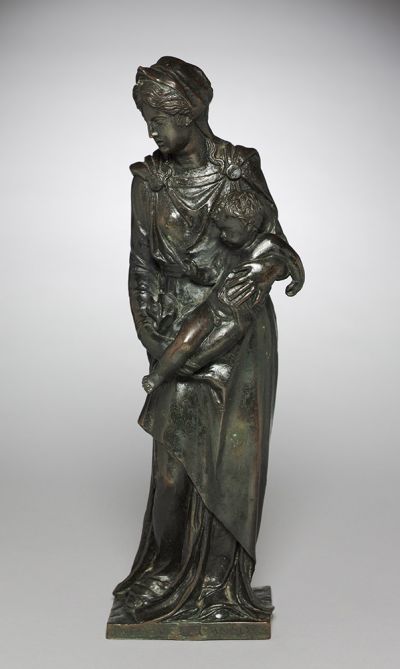 Jacopo d’Antonio Sansovino (1486-1570) was a master sculptor and architect traditionally credited with introducing the style of the High Renaissance into Venice. He is best known for his works in and around the Piazza San Marco in that city. Sansovino’s Biblioteca Marciana was praised by Andrea Palladio as the best building erected since Antiquity. It is one of Venice’s most richly decorated Renaissance structures, which stands in front of the Doge’s palace, across from the piazzetta. Construction of this beautiful building spanned 50 years and cost over 30,000 ducats. Through this building, Sansovino successfully introduced the language of classicism—the legacy of ancient Greece and Rome—to the Venetians with their love of Byzantine surface decoration.

Sansovino was born in Florence and apprenticed with Andrea Sansovino whose name he adopted, changing his name from Jacopo Tatti. In Rome, Sansovino attracted the attention of Bramante and Raphael. He is known to have fashioned a wax model of the “Deposition of Christ” for Perugino to use. During the period 1510-17, he shared a studio with the painter Andrea del Sarto. In 1529, Sansovino became chief architect and superintendent of properties to the Procurators of San Marco, making him one of the most influential artists in Venice. The appointment came with a salary of 80 ducats and an apartment near the campanile in San Marco. In addition to the Biblioteca Marciana, Sansovino was responsible for numerous buildings nearby, including the Zecca (public mint), the highly decorated Loggetta and its sculptures adjoining the campanile and various statues and reliefs for the Basilica of San Marco. To these, we could add a large number of churches, palaces and institutional buildings in Venice that he helped to rebuild. Sansovino planned the transformation of the Piazza San Marco into a unified arrangement of structures. Although his plan was still incomplete at the time of his death in 1570, his influence on the Venetian urban landscape has endured to this day.

Yet, despite this impressive legacy, Jacopo Sansovino is less well-known to American visitors than many of his Venetian contemporaries such as Titan or Tintoretto. He is, however, widely admired and studied by countless art historians who specialize in Italian Renaissance art. In the Cleveland Museum of Art will be found a bronze statuette of the “Madonna and Child,” made in the early 1530s and signed along its base: JACOBVS SANSOV, truncated Latin for “Jacopo Sansovino.” Standing a little more than 18 inches in height, this small statuette emphasizes the artist’s prominence as a sculptor in addition to his role as an architect. On the bronze, we may note Mary’s classicizing head reminiscent of the sculpture of ancient Rome with her veil partially pulled back to expose her hair. This underscores Venice’s role as a center for humanism and classical studies. Artists rarely signed bronzes in this period, so Sansovino’s name on the base indicates this work’s importance. The original patron has not yet been identified. While the statuette may have been made for a private client for use in a home, study or private chapel, it is also possible that the bronze was part of a larger ensemble of figures intended to be used in an altar environment within a church. Why did Sansovino choose to sign this particular sculpture when most others were left unsigned? Possibly it suggests that the bronze was intended for a prominent location or for an important client.

Sansovino’s early Venetian bronzes, such as the statuettes of the Evangelists and the doors of the sacristy of San Marco (1540s), recall the classical grace of his Roman and Florentine periods, but now, like the “Madonna and Child” in Cleveland, reveal a new independence and maturity of conception. His marble statue of the youthful “Saint John the Baptist” (1554) in Santa Maria dei Frari shows the transition from his mature style to that of his old age. Among the works showing his severe late style are the bronze portrait of Tommaso Rangone over the entrance to the Church of San Giuliano (1554), which Sansovino also designed, and the colossal statues of Mars and Neptune (1554-56). We could also add the monument to Doge Francesco Venier in the Church of San Salvatore (1556-61).

Many of Sansovino’s most important works were originally conceived as decorative elements for his architecture. He was perhaps more successful than any other Renaissance architect in fusing architecture and sculpture in this way. Sansovino’s signed figure of the standing “Madonna and Child” in Cleveland is tangible evidence of the prodigious output and importance of this gifted artist in Renaissance Venice.