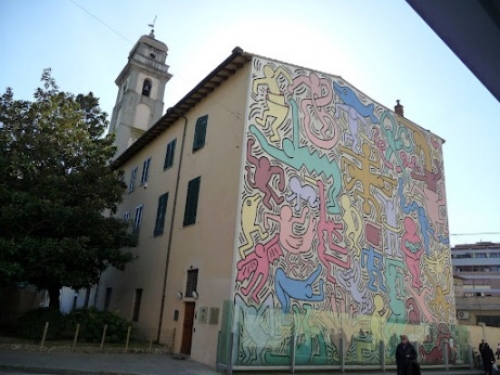 While in Pisa, you cannot pass up seeing the beautiful mural by Keith Haring. A work of modern art not only original but also surprising because it is little known to the public and exists in the shadows of other Pisa historical monuments. Yet Haring's mural "Tuttomondo" (1989) is one of the most famous in the world. Many of you may know the American artist, famous for his Street Art and "Subway Drawings" but little know that one of his most celebrated works of art is found in Tuscany.

The story behind the work of art is very interesting. The idea of creating a mural in Pisa happened by pure chance when Haring met a young Pisan student in New York City. When Haring went to Pisa to visit, he looked for a wall suitable for the kind of mural he had in mind. The piece of wall he chose was on a building close to the train station. Unfortunately, the majority of tourists that arrive in the train station do not really explore the area and therefore miss out on the opportunity of admiring the mural. The mural is on the side of the Convent of St. Anthony Abate with the Church of St. Anthony Abate (1341), facing it. It was ignored for years, even defaced and almost hidden with bus stop shelters. It wasn't until 2003, when"Tuttomondo" was rediscovered and valued again, that the piazza in front of the mural was dedicated to the American artist. Haring actually collaborated with students of the Istituto d'Arte di Pisa on the mural that covers 180 square meters (215 square yards).

"Tuttomondo," a representation of modern art, is not only the last work of art Haring created before his death but also his only work of art found in Italy. The mural is dedicated to the theme of peace and harmony in the world, which is expressed through symbolic figures, interlaced in some kind of multicolored dance. Each of the 30 figures represents a different "aspect" of the world in peace or the peace in the world. Haring used subtle colors, a notable contrast to his usual use of bright, primary colors that characterize his art. "Tuttomondo" is his first and only permanent piece of art.

Haring died at 31 years of age in February 1990, just a year after finishing the Pisa mural. His premature death was caused by the HIV virus. In fact, just before his death, he founded the Keith Haring Foundation, to benefit children with AIDS. Haring Pop Shops can be found all around the world and online that continue to sell Haring gadgets, t-shirts, posters, that display different images from his many works of art.

Today, in front of the "Tuttomondo" mural, stands the Keith Art Shop Caffè, not only a coffee shop where one can sip an espresso while admiring the mural, but also a space where art exhibitions and live painting demonstrations take place, as well as a Haring gift shop.

Tweet
More in this category: « Saint Nicholas: The Real Santa Claus The Italian Language and its Origins »