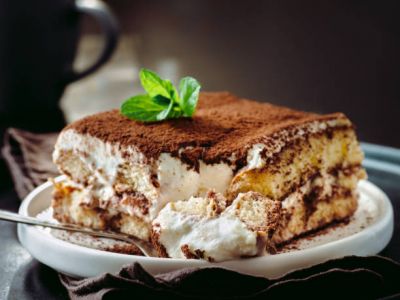 “Tiramisu” is the fifth most recognized Italian word amongst Europeans, appearing in the vocabulary of 23 different languages. The literal translation is “pick me up.” We know it as a delicious blend of mascarpone cheese, egg yolks, and sugar, layered with Savoiardi biscuits (lady fingers) dipped in freshly brewed espresso, preferably from a Moka pot, topped with a thick dusting of cocoa powder and chilled.

I thought I knew all there was to know about Italy’s world-famous dessert, after all, my family has been making and enjoying it every Christmas holiday. I knew it was a relatively new creation because it never appeared in any of my old cookbooks, and my mother didn’t have a story about it, which was unusual, but that’s where my curiosity ended - until now.

As with so many great discoveries or inventions, there have been many claims to its origin. One story is that Tiramisu was made in honor of a count, to “lift his spirits”, after attempting to unify Italy. Rumor has it that it served as an aphrodisiac in local brothels. Two regions of Italy lay claim to its origin: Veneto and Friuli-Venezia-Giulia. Other claimants were Speranza Garatti, Carminantonio Iannaccone, and Norma Pielli. But, the most accepted origin is the Campeol family’s restaurant, “Le Beccherie”, in Treviso, a city in the Northern Italian region of Veneto. Ado Campeol took over the family business after WWII, with his wife as one of the chefs.

The Italian media had dubbed Ado as “the father of Tiramisu” but as the story goes, it was his wife, Alba, and chef Roberto, who accidentally came up with this dessert while making vanilla ice cream. According to chef Roberto Linguanotto, he dropped mascarpone cheese into eggs and sugar and showed Alba, who added the ladyfingers dipped in espresso and called it “Tiramisu.” It was a variation of the Zabaglione that Alba would have in the morning during pregnancy to give her sustenance and energy.

Ado added Tiramisu to the restaurant’s menu in 1972. The recipe appeared in print in 1981 in the local food and wine publication, “Veneto.” The family never patented the recipe, but it was certified by the Italian Academy of Cuisine in 2010. Through Luca Zaia, president of the Veneto region, Tiramisu was given protected status by the European Union so that it would not be made with either strawberries or cream. Italians take their food seriously! Although the original recipe is alcohol-free, many versions exist with the addition of spirits such as rum, vermouth, or marsala wine.

Italians are so serious about their Tiramisu that they designated March 21 as “Tiramisu Day!” A 6.646-pound Tiramisu was made in Gemona del Friuli on May 25, 2015. A dehydrated version was sent into space aboard a Russian spacecraft in 2013. There is even a “Tiramisu World Cup” contest for the tastiest version of this dessert. Italians love their calcio (soccer) and their food!

Recently, while reading an Italian newspaper, I learned of the death of “il papa di Tiramisu”, Ado Campeol, on October 30, 2021, at age 93. Luca Zaia announced with sadness the news of the loss to the world of Italian gastronomy.

The original recipe has stood the test of time and is strictly followed at “Alle Beccherie”, now no longer owned by the Campeol family. The egg yolks and sugar are beaten until stiff. The mascarpone cheese is then added and beaten slowly to start, increasing speed until soft but thick. The Savoiardi biscuits are QUICKLY dipped in espresso and layered in a circular pan atop a thin layer of mascarpone cream, alternating the Savoiardi biscuits with the cream, and topped with cocoa powder. When complete, it is refrigerated for at least eight hours or overnight. It is an excellent make-ahead dessert since it freezes very well.