From the Scuola Mosaicisti del Friuli: A Recognition from the U.S. 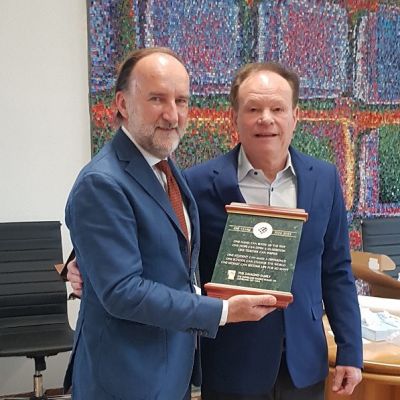 Honoring one’s origins and realizing with one’s own eyes, and with one’s heart, that the Scuola Mosaicisti del Friuli Institute, where mosaicists have been trained for a hundred years in his grandfather’s native town, led Dr. David Zavagno to leave his hometown in the U.S. for Spilimbergo, Italy.

Accompanied by his wife, Denise, and a couple of friends from Genoa, Dr. Zavagno visited the Scuola Mosaicisti del Friuli in May. His arrival was expected, preceded by an extensive correspondence in which Dr. Zavagno had expressed his desire to leave Cleveland to join the festivities that celebrate the school, in its 100th year, known from a distance through family stories. The president of the school, Stefano Lovison, and the director, Gian Piero Brovedani, awaited their guests.

An in-depth visit, which also saw the participation of Giovanni Travisanutto and his son Fabrizio, former students of the school and today owners of a mosaic workshop whose activity is well integrated in the American market, allowed Zavagno to admire the many works exposed, to walk the corridors, to access the mosaic workshops where the students were engaged in the execution of their works with hammer blows, and to understand the training path, from the first copies in Roman and Hellenistic style, up to the contemporary mosaic where the classic canons give way to creativity.

The school building itself impressed Zavagno, its development and its beauty, knowing that the original 1930s building on via Corridoni was born thanks to a contribution from the National Terrazzo and Mosaic Contractors’ Association, an American union of entrepreneurs, mostly Friulians, who had established themselves in the field of terrazzo and mosaics. He spoke with Maestro Stefano Jus, a teacher at the school, to learn more about the great external redevelopment undertaking that the school will go through in the coming months and whose design was born within it. Jus’ massive mosaic flooring with images of the flora and the regional fauna will surround the two exhibition buildings on Viale Barbacane.

After the visit to the school, Dr. Zavagno enjoyed a walk through the historic center of Spilimbergo and an interview with Mayor Enrico Sarcinelli.

In the afternoon, a meeting with the students of the school was scheduled: a moment strongly desired by Dr. Zavagno to leave a testimony and a sign to young people who dream of affirming themselves in life through the art of mosaics. With heartfelt words, Zavagno addressed the audience of students and teachers, testifying his strong bond with Friuli and an artisan knowledge that made his family fortune. In fact, his grandfather, Enrico Zavagno, was from Spilimbergo and like many young people he had emigrated in search of fortune. Through family vicissitudes he had come to the U.S.

After an initial period where the insertion into a different society was certainly not easy, with language barriers and a job market that offered low-qualifying activities to foreigners, the Friulian “Henry” managed to open his own business in 1924 in Cleveland specialized in the processing of marble and partly in the execution of mosaics. Strategic choices, resourcefulness and skills made the company grow through generations and it is still in business.

Zavagno learned craft skills by watching his grandfather and father at work. It was they who passed on to him the techniques and, above all, the passion. He learned by doing, with experience and without specific education. Should David Zavagno had achieved his professional career in another sector, the love for stone and mosaic would have remained in his soul as well as his being from Friuli, from Spilimbergo, where the two aspects are closely linked due to its family history and biography, two sides of the same coin.

Zavagno explained his emotion in being, precisely in the centenary year, at the Mosaic School, the only place where you acquire a profession that our ancestors learned with difficulty in the shops and on construction sites. It is a profession that, due to its specificity, led many emigrants to the U.S. in the first place, to be successful and to transform from workers into entrepreneurs.

Zavagno therefore invited the students to become aware of the importance of the school they attend, a possibility that his grandfather and the other Friulians of the time did not have. He urged them to excel in the art of mosaic, to develop their skills to the maximum, to bring skills, creativity, beauty to the world. “You have arrived here in Spilimbergo, leave a mark, your footprint! Bring your mosaics wherever life takes you: the world is yours to explore. I can’t wait to see your footprints, your works.”

Zavagno, demonstrated his appreciation for the educational work that the school is conducting by awarding the president and director a donation of 10,000 euros, in his and his wife Denise’s names, with the hope that it will support the training activity. He then delivered two certificates of esteem from the Embassy and the American Association that bring together marble and mosaic companies into the hands of director Brovedani. A bond started in the 1930s, never abated and today renewed.

“The generous and concrete gesture of David Zavagno and his wife, Denise, are for us testimony of how the Scuola Mosaicisti del Friuli is appreciated in the world,” declared President Lovison. “We train the students, but it is they as Mosaic Masters who bring the passion, knowledge and beauty of the mosaic to every place. We are proud of this and it is our duty to thank those who have done before us to make this school an international mosaic center. I welcome the exhortation of our American supporter to ensure that the school is committed to always being first in everything it does, we owe it to the many emigrants from Friuli, to our land and also to our friend David Zavagno to whom our most sincerity goes. Gratitude.”

Tweet
More in this category: « NIAF on Campus A Family Portrait and the Story It Tells »