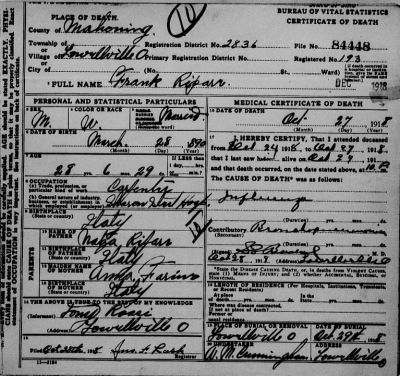 Given recent events, I have been thinking a lot about the Spanish Influenza pandemic of 1918 and how historic events shape our family history. To be a good genealogist and family historian, you need to know a bit about historical events that impacted the lives of your ancestors. Knowing about these events can help explain why an ancestor moved, changed occupations, died suddenly, or undertook some bold change. In this month’s column, I am focusing on the 1918 pandemic because I think it provides a good example of how history shaped and changed lives. Although none of my direct ancestors died from the Spanish Influenza, it did touch my family and change the course of some of their lives. This is the story of a cousin whose life was dramatically changed by the pandemic and the research I did to uncover her story. Perhaps, in your own family, there is a similar story to uncover.

Faustina “Flossie” Rozzi was my second cousin. She was born in May 1919 and was quite a bit older than me. I had always heard that she was adopted by her aunt and uncle and it was never clear to me how we were related until I started to seriously research my family history. Flossie passed away in 2005 at the age 85, so I was not able to ask her about her life. What I discovered during my research was how the 1918 pandemic changed the course of Flossie’s life even before she was born. It was a sad story but one that I realized was not unique as I learned more about what life and death were like in the fall and winter of 1918.

Flossie was adopted by Fred Rozzi and his wife Ersilia Torella Rozzi. Ersilia was the sister of Flossie’s mother. The Rozzis had no children of their own. At first not knowing Flossie’s story, I thought perhaps that Flossie was given to the Rozzis out of kindness because they could not have children.

Flossie’s biological and adoptive parents died before I was born, so I did not have much first-hand knowledge to start with. My first step was to review her obituary. It listed her birth parents as Frank and Adeline Ripara. Now that I had that information, the next record I researched was the 1920 census which established that her father was deceased and that she was living with her widowed mother, Adeline, and two older siblings. What had happened to Frank? Based on Flossie’s year of birth of May 1919, I estimated that Frank must have died between 1918 and 1920. I then looked for Frank’s death certificate assuming that he had died in Mahoning County where Flossie was born and where the family lived. I found an October 1918 death certificate for a 28-year-old Frank Ripara and the informant was listed as Fred Rozzi. I knew this had to be Flossie’s father. The cause of death was influenza. I had no idea that Flossie was born seven months after her father’s death! Frank, a young and presumably healthy man with a pregnant wife and two small children, was a victim of the Spanish Flu which killed upwards of 50 million people. Also listed on the death certificate was that Frank worked as a carpenter at the local steel mill. From these records I was able to piece together what it was that changed the course of Cousin Flossie’s life.

To understand Flossie’s story better, I needed to understand what was happening in the Mahoning Valley in the fall of 1918 so I researched online editions of the local newspapers. I found that during the months of October, November and December, the area was overwhelmed with people contracting the flu. In fact, the local mill’s clubhouse became an “emergency hospital” set up to care for those sick from the flu. This makes me believe that the mill itself was probably dealing with many ill employees who spread the virus while working closely together and Frank likely caught it there. After his death, 22-year-old Adeline, with a baby on the way, struggled to raise her two children who were both under the age of four. We know from the 1920 census that the family was still together, but around 1921 Adeline remarried and moved with her new husband and the two older children to New Jersey. It was at this point that little Flossie, who was named Faustina for her father (Frank’s real name was Fausto), was taken in by her uncle and aunt. Fred and Ersilia, I am told, loved Flossie and she devoted her life to caring for them when they grew older. Though I know my cousin had a good life, I still felt sympathy for the little baby who came into this world without the chance to ever know her father and to be separated for the rest of her life from her siblings. Flossie’s story, sadly, is not uncommon. Many children lost parents to the Spanish Flu pandemic as most of its victims were between the ages of 20 and 40-years-old.

If you have a question about your Italian roots or need help with an Italian genealogy puzzle, I would love to hear from you. You can send me an email to This email address is being protected from spambots. You need JavaScript enabled to view it..