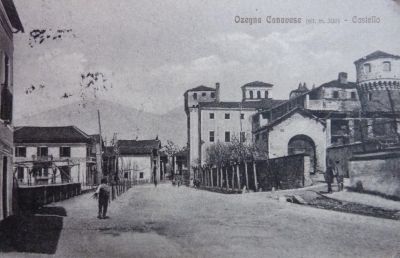 After a few days of research, Nora learned that her roots in Italy came from her paternal grandfather who was born in Ozegna, a small village outside of Turin, Italy in the late 19th century.

This year, the “Discovering La Famiglia” column hopes to help La Gazzetta Italiana readers find answers to their Italian genealogy questions. This month’s story is about Nora who contacted me after she received the results of her Ancestry DNA test. Nora was surprised to learn that she was about 25 percent Italian and she wanted to confirm the finding. Nora did not know much about her family tree as her parents split up when she was a young girl and she lost her mother (who was not Italian) a few years later. Raised by an aunt and uncle, family history never came up in conversation. Nora found herself immersed in Italian American culture when she married her husband who was of Italian descent and she learned to be a wonderful cook of Italian American cuisine from her mother-in-law. She never realized that perhaps she had Italian roots too!

Starting with Known Information
Nora suspected her Italian DNA came from her father’s line. We started our research with an assumption that one of her father’s (who is now deceased) parents may have been Italian. In order to protect Nora’s privacy, some names have been changed, but the process to determine who Nora’s Italian ancestor was remains. Nora’s father’s name was Peter Degeorge. We knew his date of birth and that he was born in Fayette County, PA. Nora did not have a copy of her father’s birth certificate. Family lore was that Peter had several siblings and his parents split up when Peter was a child. He was then raised by a stepfather in the Youngstown area. The origin of the Degeorge surname was uncertain.

Beginning the Search
The first set of records I searched for were the U.S. Census records. I was looking for the names of Peter’s parents. The only result that came up for a “Peter Degeorge” living in Youngstown was the 1940 census. It showed that 20-year-old Peter was living with 69-year-old Joseph and 63-year-old Mary Degeorge, a married couple with Peter listed as their son. I was not able to locate a 1930 census record for Peter Degeorge, so I began to wonder if the stepfather story was accurate and that Degeorge was not Peter’s original surname. To understand the relationship between Peter and Joseph and to identify the names of Peter’s siblings, I searched for and found the obituaries for Joseph and Mary. In Joseph’s obituary it states that he left a widow, the former Mary Negra and six stepchildren including Peter! Using this new fact that Mary was once known as Mary Negra and one of her children was also an unmarried daughter named Mary Negra, I thought that perhaps Peter’s original surname could be Negra.

The Link between Old and New Surnames
Using the name “Peter Negra,” I searched for earlier census records for a Negra family living in either Mahoning County (OH) or Fayette County (PA). The 1930 census record was a gold mine as it showed the linkage between the Degeorge and Negra families. Joseph Degeorge and Mary Negra were neighbors in 1930 and four of Mary’s children that were in Joseph’s obituary were living with her in Mahoning County. Now that I had a time period to search between 1930-1940, I was able to locate a Mahoning County marriage certificate from 1933 for Joseph and Mary that confirmed that Joseph was indeed the stepfather of Peter.

Who Was the Padre
Now I needed to figure out who Peter’s biological father was. The census records listed Mary’s ethnicity as German or Bohemian and not Italian – the Italian had to come from Peter’s father. Using the names of Mary and her older children I was able to locate the 1920 census which was taken just one month before Peter was born. With this census record, I got lucky! In the 1920 census for Fayette County, Mary Negra and her five oldest children were living with Matteo Negra, an Italian immigrant, who is listed as the head of the household and Mary’s husband.

Tracing to Italy
With the information I found in the 1920 census, I was able to trace Matteo’s life and find his naturalization petition and his passenger list. These documents provided valuable information and served to confirm that Nora’s grandfather was her Italian ancestor. Nora now had her original family surname and the name of her ancestral village where her Italian roots grew from!
If you have a question about your Italian roots or need help with an Italian genealogy puzzle, I would love to hear from you.  You can send me an email to This email address is being protected from spambots. You need JavaScript enabled to view it..

Tweet
More in this category: « Discovering La Famiglia: La Gazzetta Italiana Readers - It is Your Turn! The Italian American Dream »