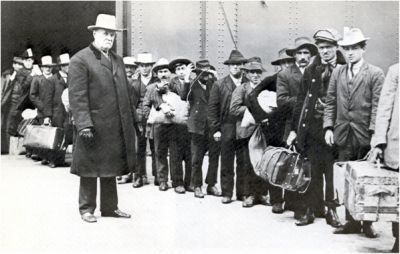 In the two most recent columns we learned about contemporaneous annotations on steamship passenger lists made at the time of immigration. This month, we do a deep dive into the annotations that were made post-immigration. These annotations were usually related to the naturalization process and can be useful when you are trying to find when and if an ancestor became a naturalized citizen.

The Immigration Process and Passenger Lists

When an immigrant who arrived after June 29, 1906 applied to become a U.S. Citizen, a review of their passenger list would be initiated to verify if the immigrant met the residency requirement and had arrived here legally. A new government agency, the Bureau of Naturalization, was responsible for checking passenger lists and issuing a Certificate of Arrival. When the immigrant’s record was verified, the Certificate of Arrival was mailed to the courthouse where the Declaration of Intent (first papers) or Petition for Naturalization (second papers) were filed. At first, in the years between 1906 and 1925, the Bureau did not place any marks on the passengers when a record was checked. However, as a result of fraud in the immigration process (applicants using the names of other immigrants on their applications), the clerks began marking manifests in 1926. These annotations usually consist of:

In checking the passenger record, if there were too many discrepancies between what the applicant alleged on their petition and the passenger record such as name, age or place of birth, the Bureau would not issue a certificate but a form 404 or 505 to document what information was found in the record and return this record to the court for evaluation. An annotation might look like this: “6-115109- 9/11/1941 505.” This is found on the passenger list for a man named Francesco Picharelli who applied for naturalization and had his passenger list checked on September 11, 1941 for INS District Court #6, application number 115109. Since the clerk was not completely certain he found Francesco’s record, the clerk issued form 505, rather than the Certificate of Arrival. Some record annotations will have an “x” between the District Number and the Application Number to denote that the applicant did not have to pay a fee because he or she arrived before 1906, however the record was still checked to prove residency requirements.

If you are curious where an immigrant might have applied for naturalization, the INS District numbers found on passenger lists are what to look for. Unfortunately, over the years, districts were re-numbered but, a good reference can be found at https://www.jewishgen.org/InfoFiles/Manifests/occ/.

You will only see these pen and ink annotations on lists for actions before 1945. Original passenger lists were microfilmed between 1942-44 and any checks of passenger lists after 1944 were done against the microfilm not the original paper lists.

Annotations as a Result of the 1924 Immigration Act

Immigrants leaving the U.S. after July 1, 1924 with plans to return could apply for a re-entry permit. This would guarantee they could come back despite the immigration quotas in effect with the 1924 Immigration Act. There was an application and a fee to be issued a re-entry permit. The passenger’s previous list was checked and would be annotated with “P-########” or “Permit-#######” and sometimes with a date of the permit application. The ####### represents the application number. In this example, this passenger’s permit application number was 1079365 and the date was May 2, 1936. These annotations are usually found in the name column on the far left of the page.

On this same record we also see another annotation “Auth File 99366/782.” Prior to 1924, there were no re-entry permits, but immigrants had often requested to have some proof that they were returning to the U.S. from abroad and that they had indeed been in the U.S. before to ease their re-entry process. In the Port of NY, the Port Commissioner began issuing letters and would annotate the original passenger list with a file number related to the request (these files no longer exist). The annotation would be a set of numbers like the above “99366/782.”

You will only see these types of annotations for the Port of New York as the immigration officials at Ellis Island created a file to document requests and then annotated the passenger list with a number to cross reference the file. Sometimes the record was annotated with “V/L” or “v/l” and sometimes followed by a set of numbers that reference the file containing the letter from the immigrant. The “V/L” stands for Verification of Landing.

An excellent reference to help you decipher annotations and marks on manifests is https://www.jewishgen.org/infofiles/manifests/. I hope the secrets we have uncovered help you in your family research.

Tweet
More in this category: « Christmas in Little Italy The Italian American Dream »