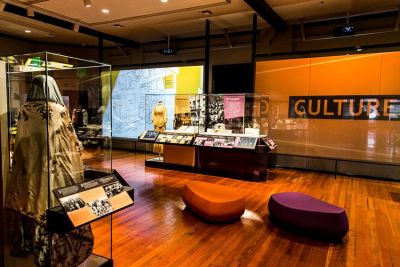 Los Angeles is home to the fifth-largest Italian American population. For over a century, Los Angeles did have a Little Italy. It started in the 1800s when L.A. was a Mexican puebla. By the turn of the 20th century, L.A.’s Little Italy had expanded into present-day Chinatown and beyond. By the 1970s, the Little Italy neighborhood was dwindling as Italians aged and influxes of non-Mediterranean residents moved in. Today’s downtown L.A. has undergone so many changes since the 1950s that almost nothing has survived from the times when Italians were one of the major ethnic groups to live there.

However, Italians left a lasting mark on L.A. and its surround area. L.A.’s agricultural and financial sectors flourished in part due to important Italian contributions. Viticulturalists extended their knowledge of grape growing in California’s vineyards and Italian American magnate Joseph Sartori founded First National Bank in 1887 and funded the Los Angeles Aqueduct in 1913, a monumental city project.

In 1908, Italian Hall, now the oldest remaining building from L.A.’s Little Italy, was established. It was the epicenter of Italian culture in the city serving as a gathering place for the Italian community. Weddings, official ceremonies, civic functions, and more took place there. Along with most of the original Little Italy, Italian Hall met its demise and sat unused for over 65 years. However, promise of a new day is coming for Italy-lovers in Los Angeles. In 2016, the Italian American Museum of Los Angeles, or IAMLA, opened its doors in the historic Italian Hall. The 5,000 s.f. museum presents the Southern California Italian American experience with an emphasis on L.A.

With the IAMLA, Italian American history enthusiasts can also find a few other places that keep the memories of a former Little Italy alive. The Pelanconi House on Olvera St. built in the 1850s by Italian vintner Giuseppe Covaccichi was purchased by Antonio Pelanconi in 1871, giving it its present name. It is the oldest fired brick building in L.A. St. Peter’s Italian Catholic Church was established in 1904. It still plays an important role in the religious life of many Italian Americans in the community. The San Antonio Winery, founded in 1917 by Lombardy-born Santo Cambianica, is L.A.’s oldest family-owned business. Today it offers guided tours. In Watts, a neighborhood in South Los Angeles, stand the Watts Towers, considered one of the nation’s finest works of folk art. The piece, constructed entirely of recycled objects, took Italian immigrant laborer Sabato Rodia 34 years to complete. And, the Eastside Market, an Italian deli founded in 1929, is still slicing traditional salami in Chinatown.

While a prominent Little Italy may not be in existence in the City of Angels, the foundation laid by Italian immigrants still permeates the area. Long-established and emerging Italian restaurants are everywhere. The 11th annual Taste of Italy Los Angeles takes place this October featuring food, wine and entertainment for all. The IAMLA hosts regular events inviting everyone to learn about the history and become a part of the future of Italians in Los Angeles. Perhaps with ongoing fundraising and development, Little Italy Los Angeles will rise again.