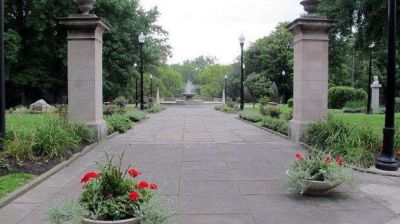 Our Italian heritage is a vast one encompassing not only our colorful social customs, but also the cultural heritage of Italy that has given so much to the world in the arts and sciences.

In 1930 an Italian businessman, Philip Garbo from Cefalu, Sicily, at the urging of the City of Cleveland, spearheaded the building of a cultural monument in a late Renaissance design honoring Italy’s cultural greats dedicating it “as symbol of the contribution of Italian culture to American democracy.”

He enlisted businessmen and Italian organizations and their members along with the Italian government to help build the Italian Cultural Garden in Rockefeller Park. Its mission was not only to honor the culture greats of Italy, but to use this public space to share Italy’s great cultural arts with the general public.

They accomplished this with a bust of Virgil, the Roman poet, and images of Leonardo da Vinci, Michelangelo, Marconi, Petrarca, Giotto, and Giuseppe Verdi, along with performances of “Opera in the Italian Garden” in the 1930’s and 1940’s, and concerts at Severance Hall and art exhibits for the public. Today, the Italian Garden presents both opera and ballet, both of which originated in Italy.

The Italian Cultural Garden is supported through the generosity of the Cleveland Italian community. Since 2007, it has been undergoing a $1.5 million restoration with plans to complete the original design of a Pantheon structure with a center statue of Galileo and 150 markers honoring famous Italians throughout the centuries in the Arts & Letters and Arts & Science.

The Italian Cultural Garden in Cleveland is our community’s public statement of our beautiful heritage recognizing the vast culture of Italian intellect, refinement and feeling for beauty and its brilliant accomplishments and contributions that embrace the grand influence with which Italy changed the world.

Tweet
More in this category: « Traditions Discovering your roots »