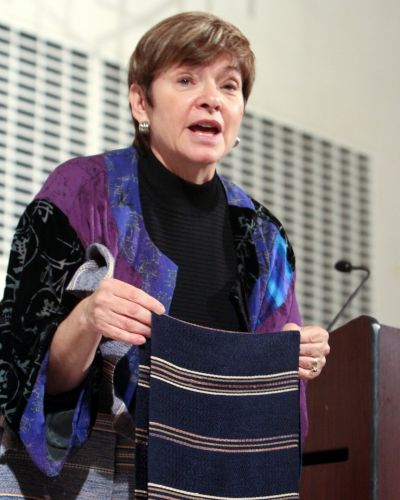 Rabbi Barbara Aiello explains how hidden Jewish traditions are uncovered. Here she demonstrates how the woven "vancale" scarf from Tiriolo has its origins in the Jewish prayer shawl, called a "tallit."

“I have been trying (unsuccessfully) to find information on my great-grandparents and their surnames…For years now I have felt a deep connection with Judaism, and was wondering if it was simply a spiritual connection, or if it’s something that runs a bit deeper.” A.F.

A request like the one sent by A. F. represents only one of dozens of requests that I receive each week and it was from a plea like A.F.’s that the Italian Jewish Cultural Center of Calabria added surname research to our mission so that Italian Americans like A. F. could determine if their Italian surnames hold the key to a secret Jewish ancestry.

In recent years, historians whose expertise includes the study of the demographics of Calabria, Sicily, Sardinia, and the Aeolian island chain have uncovered information that many southern Italians like A.F. have always suspected to be true. Now, we know that a large percentage (some experts say 50 percent or more) of southern Italians have hidden Jewish ancestry.

The date was Dec. 5, 2004 and I found myself in a place not often frequented by a Jewish rabbi – the meeting room of a Catholic Church. I had just concluded a lecture on the lost Jews of Sicily and Calabria when a young woman pushed her way forward, clearly desperate to talk with me.

Monsignor Natale Colafati, who was now directing this animated group of Calabresi to a side room, provided the impetus for this historic meeting. Opening the church to my lecture “La Judeka di Nicastro e la Storia degli Ebrei,” (“The Nicastro Jewish Quarter and the History of the Jews”) the Monsignor introduced my presentation by reminding the more than 100 assembled Calabresi how important it is to understand one’s history. To my right, on the dais, sat a renowned professor, Vincenzo Villella, whose book about the Jews of Nicastro was one of only a very few volumes that acknowledged the ancient historical presence of the Jews in Calabria.

In those days, my facility with the Italian language left much to be desired, but even so, I was stunned when the audience sat in rapt attention, completely absorbed by my family story. When the lecture concluded, I was touched by the number of local Calabresi who wanted to know more. That’s when the young woman demanded my attention. She grabbed my hand and whispered, “I have always felt Jewish but never believed that our family could be Jewish. Please help me.”

Her name was Antonella and when she told me her surname, I recognized at once that it’s one of many surnames listed in Inquisition records that indicated Jewish ancestry. Pressing Antonella’s hand between my own, I promised her that I would help her. It was that promise that formed the basis of what was to become a more than decade-long study of the thriving Jewish population that once graced hundreds of Calabrian villages and towns. It became my personal mission to serve those who wanted to understand if their family history included a Calabrian Jewish connection.

Interestingly enough, the majority of Italian Americans who approach us in search of possible Jewish ancestry are not surprised by our findings. Most say things like, “I have always felt Jewish so it’s good to know that we have a surname connection to Jews who lived during Inquisition times.” Others say, “I’ve always been Catholic and I will continue to be. But it is so good to finally understand why our family traditions were so different from other Italian families.”

For more information about the Italian Jewish Cultural Center of Calabria (IjCCC)  and Synagogue Ner Tamid del Sud in Serrastretta (Calabria) Italy, see www.rabbibarbara.com or contact Rabbi Barbara at This email address is being protected from spambots. You need JavaScript enabled to view it.

Tweet
More in this category: « Life as a Sicilian peasant Creative Ways to Use Social Media to Find Your Italian Roots »