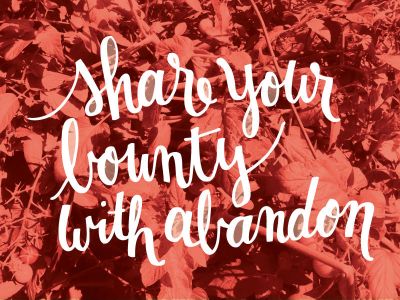 ”A firm defense of quiet material pleasure is the only way to oppose the universal folly of Fast Life...our defense should begin at the table with Slow Food.”

“Our Mother Earth brings us together in a universal brotherhood.”

“It is pointless to speed up everything just because we can, or because we feel we must. The secret of life is always to look for the tempo giusto.”

It began with the outrage and action of one man, Carlo Petrini, a passionate Italian journalist when he saw a sign that McDonald’s was coming to Rome. The thought of homogenized, mass-produced fast food ignited his ambition to preserve cultural cuisine. He believed that fast food would lead to the extinction of the artisan cheeses, intricate pastas, cured meats, and special sauces that he loved from his homeland. He also feared it would lead to the denigration of families gathering to share meals in a spirit of conviviality.

Thus, in 1986 in Bra, a small Piedmontese city in Italy, Carlo Petrini along with a group of like-minded friends wrote a manifesto for and established the Slow Food movement with a snail as its emblem. It is an educational organization which celebrates and preserves cultural cuisine along with its associated plants and animals, wines and farming and processing techniques passed down through tradition. It promotes sustainability, cultural and biodiversity, creativity, passion, and the spirit of sharing and service to others.

There are approximately 100,000 members worldwide in 150 countries, 450 regional chapters and 1,300 local chapters known as convivia of which 360 are in Italy with 3,500 members.Through dinners, workshops and other events, they seek to expand awareness of local farms and small food producers. Their philosophy: ”good (should please the senses), clean (should be environmentally responsible and free of chemicals) and fair (food producers should be fairly compensated) food.”

The Ark of Taste, maintained by the global Slow Food movement, documents, promotes and safeguards local cultivars, animal breeds and produce threatened by mega markets and industrial farms. They promote these foods to keep them in production thereby preserving traditions, cultures and memories. The Ark of Taste international catalogue lists foods facing extinction. What a shame it would be to lose lentils from Abruzzi, Ligurian potatoes, black celery of Trevi, Vesuvian apricots, purple asparagus of Albenza, and much more.

Each regional and local chapter of Slow Food promotes local flavors and artisans through wine tastings, workshops and farmers markets numbering over 8,000 in the U.S. alone. They have established seed banks to preserve heirloom varieties; developed political programs to preserve family farms; lobbied for organic farming and against genetic engineering and pesticides. Organic farming involves crop rotation to enrich rather than deplete the soil as with mono-culture. They promote biodiversity as opposed to single strains or breeds which narrow flavor choices and where a single virus can wipe out entire species leading to the use of antibiotics and pesticides.

Slow Food USA was started in 2000 and although membership has decreased, it remains an important force in preserving what makes each locale unique. Ohio is a diverse region with a rich culinary heritage and many farm communities. There is a growing concern for its remaining farms to preserve their culinary and biodiversity. In 2004, the Northern Ohio Slow Food convivium sent nine farmers to Terra Madre Day, an international gathering in Turin, as a part of Slow Food International.

As an Italian American, I am beyond grateful to have grown up with Sundays and holidays where family and friends gathered together for course after course of homemade food and wine, much of which came from our backyard garden, grown and prepared with love. These feasts would last for many hours as though time didn’t exist.

There is simply something in the nature of cooking and eating together that forms a bond between people. “Companion” is Latin meaning “with bread.” The phrase “breaking bread” means to get together with people over food and conversation. If we take the time to savor the flavors of artisanal foods and wines, making memories while sharing our lives in the spirit of community, perhaps we may experience the slow movement of time Carlo Petrini has attempted to achieve.