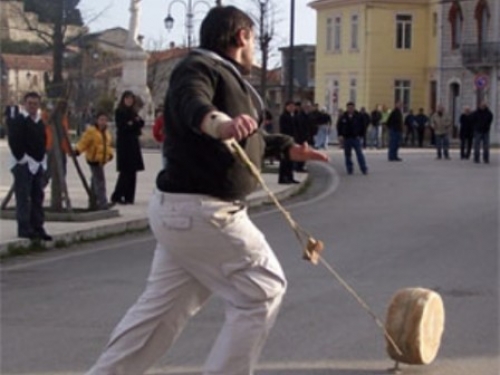 Easter (Pasqua) is a holiday with universal significance throughout Christianity, but is celebrated in very different manners across the world. In Italy, Easter is a weeklong holiday that finds most children off from school and many adults taking off work from the Wednesday before Easter until the Wednesday after Easter. There is an air of somberness in the days leading up to Easter, which consist of processions of people in traditional costumes carrying large statues of the Virgin Mary and Jesus, as well as masses, displays in public squares and even reenactments of the stations of the cross.

Easter Sunday, however, is a day of joy and celebration with endless food and wine, often celebrated with friends and neighbors. In fact, there is a popular saying among Italians, "Natale con i tuoi, Pascua con chi vuoi," which loosely translates to "Christmas with family, Easter with whomever you choose." The celebration continues into the Monday following Easter, known as la Pasquetta. La Pasquetta is a national holiday in Italy, one that usually celebrates the beginning of the warm weather where people pack picnics made from their Easter leftovers and take them to the openings of their local parks.

Festivals and celebrations take place throughout Italy on la Pasquetta, with one of the oldest, most famous and, well, most bizarre events taking place in Panicale, a village set in the hills of Umbria, completely surrounded by a stone wall and dating back to medieval times. On la Pasquetta, the locals in Panicale gather for the annual Ruzzolone, or "rolling the cheese," a competition said to be over 3000 years old, having originated during the Etruscan times.

Ruzzolone is a competition with elements of bocce, bowling and even yo-yo. The giocattori, or players, attach a large, leather strap with a wooden handle around a nine-pound wheel of pecorino cheese and use that strap to launch the cheese wheel through a course of curvy streets that wrap around the village walls. After each launch, the crowd runs alongside the wildly rolling cheese wheel, and when it comes to a stop, that place is marked with a piece of chalk. Since the cheese is not always the easiest thing to control, it often rolls off-course into the hillside with officials chasing after it. In this case, they take the chalk, and mark the spot where the cheese left the course.

The goal of Ruzzolone is to move the cheese wheel throughout the course with the least amount of "strokes." Of course, it is a success just to get the cheese wheel to remain intact by the end of the course. The winner of the competition gets to bring home the wheel of cheese, and if any cheese breaks along the way, everyone gets some of it!

The funniest part of Ruzzolone is that most people don't even stick around to see who wins it. By the time the course is completed, most of the spectators have been drawn to the village square for a festival of music, free hard-boiled eggs and, of course, free wine! Buona Pasquetta a tutti! (Happy Pasquetta to all!)

More in this category: « Italian Wines for your Wedding Cheese festivals throughout Italy »